The 96-year-old monarch, who now rarely carries out public engagements outside of her royal residences, joined her youngest son Edward for the official visit on Tuesday. Dressed in sunshine yellow, the queen arrived at 11:32 am (1032 GMT), stepping carefully from the transparent lift while holding a walking stick.

Britain's Queen Elizabeth II has made a surprise appearance at Paddington station in London to see the completed Elizabeth line, which is named in her honour.

The 96-year-old monarch, who now rarely carries out public engagements outside of her royal residences, joined her youngest son Edward for the official visit on Tuesday.

Dressed in sunshine yellow, the queen arrived at 11:32 am (1032 GMT), stepping carefully from the transparent lift while holding a walking stick.

The nation's longest reigning head of state is just over two weeks away from her Platinum Jubilee celebratory weekend.

A Buckingham Palace spokeswoman said: "In a happy development, her majesty the queen is attending today's event to mark the completion of the Elizabeth line.

"Her majesty was aware of the engagement and the organizers were informed of the possibility she may attend." 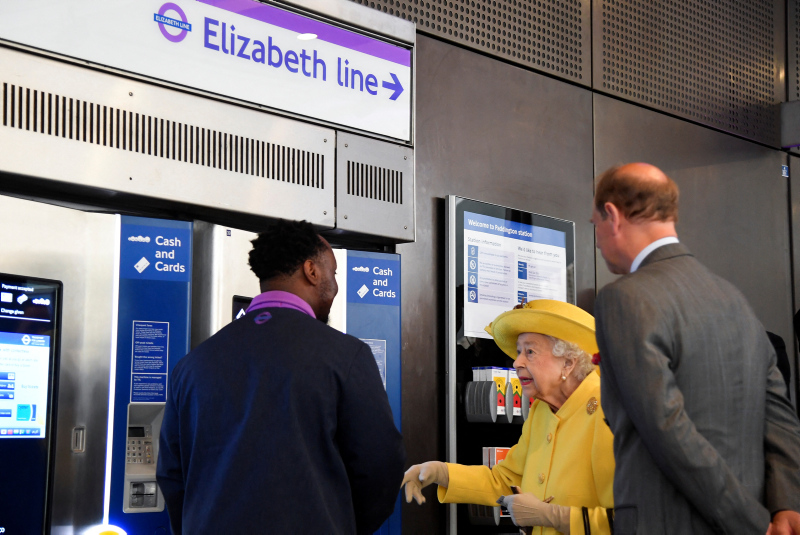 The queen's outfit was a Stewart Parvin double-wool crepe coat with an A-line silk dress in shades of yellow, royal blue and turquoise, and a matching hat by Rachel Trevor-Morgan.

She was wearing her Singapore brooch.

The queen rallied to make a trip to the Windsor Horse Show on Friday and on Sunday was the guest of honour at the equestrian extravaganza "A Gallop Through History" near Windsor, the first major event of the Jubilee festivities.

Tuesday's engagement is the queen's first one outside of the Windsor area since she attended the Duke of Edinburgh's memorial service in Westminster Abbey seven weeks ago.

The queen and Edward were welcomed by Prime Minister Boris Johnson, Mayor of London Sadiq Khan and Transport for London commissioner Andy Byford.

They met staff who have been key to the project and who will run the railway, including train drivers, station staff and apprentices.

The Elizabeth line, named in honour of the queen, will open to passengers on May 24.

Crossrail, the project to build the new east-west railway, was delayed and over budget due to numerous issues including construction difficulties and complications installing signalling systems.

The total cost has been estimated at £18.9 billion, including £5.1 billion from the government.

The Elizabeth line will boost capacity and cut journey times for travel across the capital.

It will stretch from Reading, in Berkshire, and Heathrow Airport, in west London, to Shenfield, in Essex, and Abbey Wood, in south-east London.

Trains will initially operate in three sections, which are expected to be integrated in the autumn.