Artifacts dedicated to the cult of Nike, the ancient Greek goddess of victory, are making a triumphant return at a museum in Türkiye's Aegean region.

Special artifacts related to Nike will be displayed for the first time by the Izmir Archeology Museum in August as part of its project called "Seeing What You Can't See," in which every month the museum exhibits unique artifacts taken from storage rarely seen by the public.

Three works depicting Nike are now open to visitors in the treasury room of the museum.

A 49-centimeter (19-inch) marble column dating back to the Hellenistic era is the centerpiece of the exhibit.

The column was unearthed in 1925 from the ancient city of Pergamon in Izmir's Bergama district.

The piece shows a figure of Nike holding onto her skirts with her hands, and is shown with wings, a dress, and laurel leaf motifs.

The marble column, believed to be about 2,000 years old, is among the first artifacts brought to the Izmir Archeology Museum and is now being shown to the public for the first time in nearly a century.

The second piece in the exhibit, a burned clay oil lamp unearthed from the ancient city of Iasos in Milas in the western Mugla province, has a figure of Nike on its concave surface. 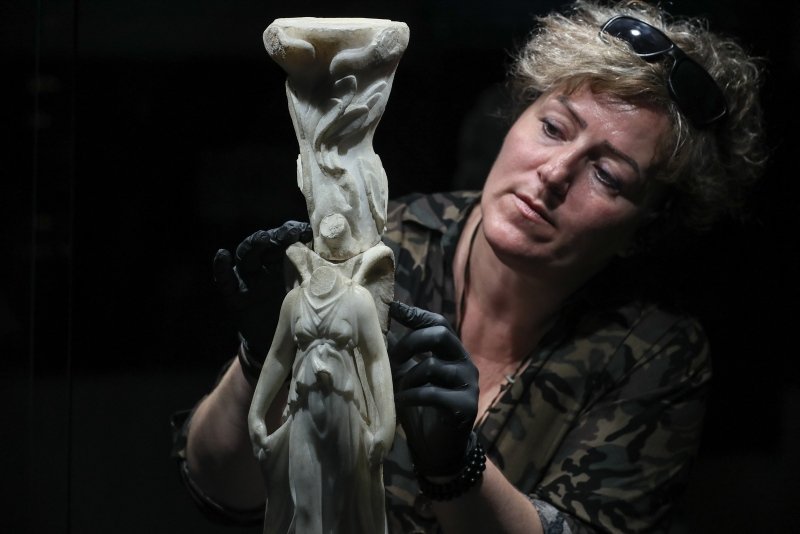 The nearly 2,500-year-old Nike figure was unearthed from the ancient city of Neonteikhos in Menemen, Izmir and is believed to have been a burial gift.

Speaking to Anadolu Agency, Cengiz Topal, director of the Izmir Archeology Museum, said: "Nike is seen as a personalized form of victory in Greek mythology who can run and fly, and in the Roman era she was known as Victoria."

Topal said Nike could be found both in the public arena and in temples of other mythological gods, such as Athena, the goddess of wisdom, and Zeus, the king of the gods.

The goddess of victory was often used to commemorate and bless victories in wars and competitions, Topal added.