Turkey registered 4,542 more patients afflicted by the novel coronavirus over the past 24 hours, according to figures by the Health Ministry on Thursday.

The weekly hospital bed occupancy rate is 54.7%, while a total of 3,850 patients are in critical condition, according to the ministry figures. 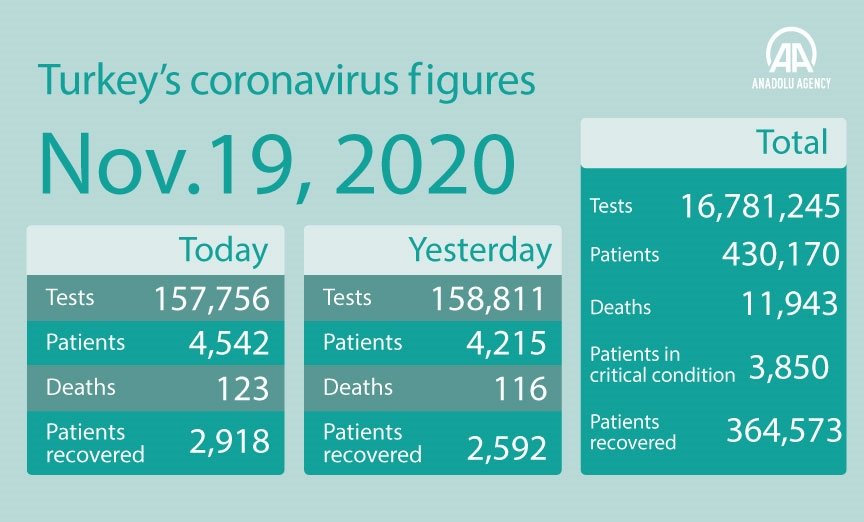 "If we take the measures ourselves, we will not be forced into mandatory restrictions," Health Minister Fahrettin Koca said on Twitter.

"If we cannot turn the course of the epidemic in our favor, there may be mandatory measures in all areas of our lives. Join the fight," he added.

President Recep Tayyip Erdoğan had said Tuesday that partial weekend curfews would be imposed to stem the spread of the outbreak.

The curfews would be effective on weekends, but movement will be allowed between 10.00 a.m. to 8.00 p.m., so as not to disrupt supply and production chains.

Cinemas will remain closed until the end of the year.

Malls, markets, restaurants and hairdressers will also be open from 10.00 a.m. to 8.00 p.m. throughout the week, with restaurants only providing delivery services.

A partial curfew that was already in effect for people over the age of 65 was also expanded to include those under 20, with the exception of those who have to go out for work. These will be allowed outside their homes from 10.00 a.m. to 4.00 p.m. throughout the week.

The virus has claimed nearly 1.35 million lives in 191 countries and regions since last December, according to the US-based Johns Hopkins University.

Over 56.4 million people have been infected, and more than 36.2 million recovered from the disease to date.