With the efforts of Turkish security forces, the prayers of two families have been answered by being reunited with their children after they were kidnapped by PKK terrorists.

According to security forces, five members of the terror group surrendered on Thursday to Turkish authorities.

Halise Alptekin and Mehmet Emin Alkan, among the group that surrendered to Turkish authorities, were reunited with their families in southeastern Diyarbakir.

Şahize Altınkaynak, Halise Alptekin's mother, from the southeastern Mardin province, had taken part in a sit-in protest against the PKK terror group in Diyarbakır. 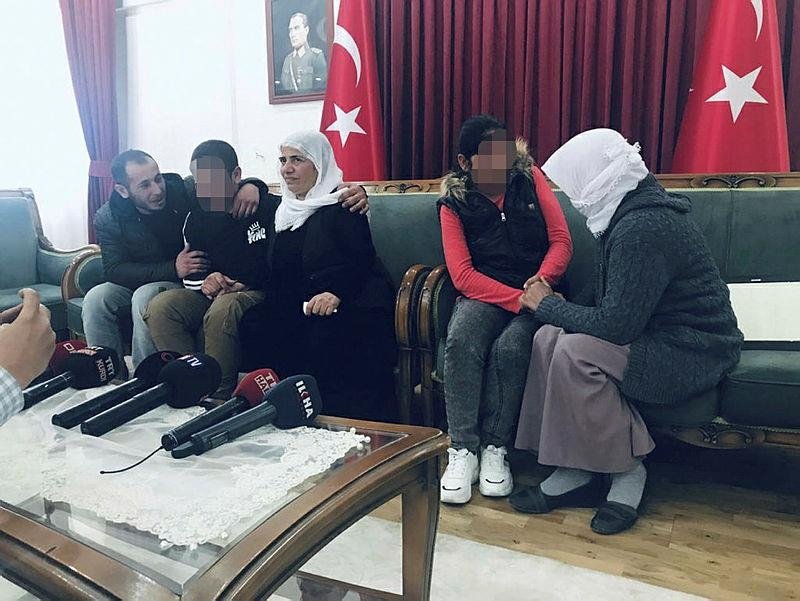 Mehmet Nuri Alkan, the brother of Mehmet Emin Alkan, also took part in a sit-in protest against the PKK terror group in Diyarbakir.

After getting the good news, the parents came to the provincial counter-terror police department to reunite with their children after many years.

The protest started last September outside the offices of the Peoples' Democratic Party-a party accused by the government of having links to the terrorist YPG/PKK-in Diyarbakir when a trio of mothers said their children had been forcibly recruited by PKK terrorists.

Since then, the number of families in front of the building has grown, as they demand the return of their children, who, they claim, were deceived or kidnapped by terrorists.

With today's news, the number of families reuniting with their kidnapped children reached 11 on the 178th day of protests.

In its more than 30-year terror campaign against Turkey, the PKK - listed as a terrorist organization by Turkey, the U.S. and EU - has been responsible for the deaths of 40,000 people, including women, children and infants. The YPG is the PKK's Syrian offshoot.