"The goal of Russia is a full-fledged occupation of Ukraine," the president told students by video link to 10 universities across Canada.

Ukrainian President Volodymyr Zelensky spoke to Canadian university students virtually Wednesday and asked them to pressure the government for more aid for his beleaguered country.

"We are fighting for freedom," said Zelensky, adding that Ukraine needs weapons and money, as well as having permanent sanctions placed on Russia.

"We need weapons, we need financial support, we need humanitarian support, and we need permanent 24/7 sanction pressure," he said. "No matter how many times I repeat this, it will never be one too many while the war is going on."

Moscow has been pounding Ukraine with soldiers and military might since its military operation began Feb. 24.

"The goal of Russia is a full-fledged occupation of Ukraine," the president told students by video link to 10 universities across Canada.

Zelensky was defiant, saying Ukraine has already "surprised the world" by its stout defense against the might of Moscow, "and we shall prevail against all the odds for the free and democratic future."

The Ukrainian president urged students to not let countries forget about the almost four-month conflict by attending rallies and spreading the message to help his country via social media.

He said the internet is a potent ally in Ukraine's fight.

"(Information) can sometimes give a bigger blow than some types of weapons, and our task is (to not let) the information ... run out, just like real shells and bullets shouldn't run out at the front."

She said Ukraine's democracy was at stake and Western countries could not allow Russia to prevail.

Freeland also noted that Canada has committed CAN$1.87 billion (US$1.44 billion( in aid to Ukraine to date. 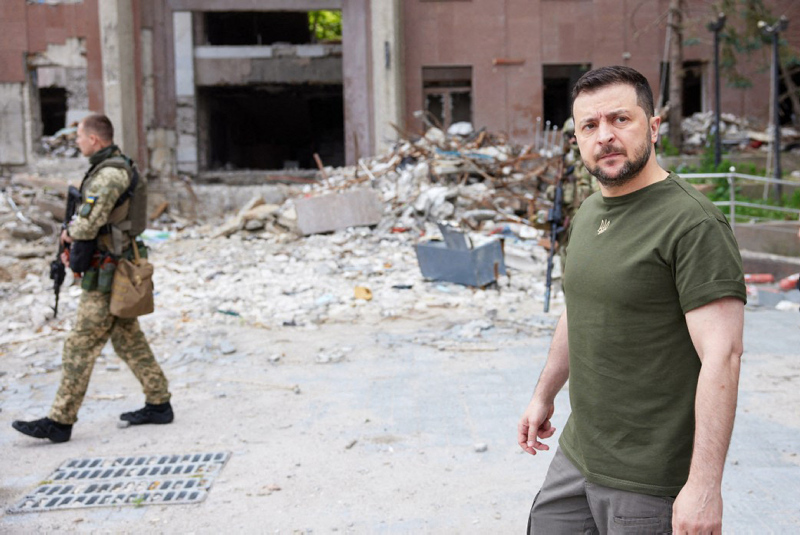 Zelensky also said that his role models were ordinary Ukrainians who resisted invading Russian forces and he compared Russia to the fictional arch-villain Lord Voldemort in the 'Harry Potter' books.

Zelensky, dressed in a military uniform, was answering questions via videolink from students at the Munk School of Global Affairs and Public Policy at the University of Toronto.

Asked by one student who his role models were, Zelenskiy said: "The people of Ukraine... and there are very many of them."

"An ordinary Ukrainian farmer who could take his tractor and close off a road to Russian tanks, an ordinary woman who would go out and stop armoured vehicles with her bare hands... Those are the people I look up to," he said via an interpreter.

The student noted that Zelenskiy has been compared by his supporters to British World War Two leader Winston Churchill and to Harry Potter, the fictional boy wizard who finally defeats his archenemy Lord Voldemort.

"Thank you for these kinds of comparisons. Harry Potter is better than Voldemort, and we know who is Voldemort in this war, and who is Harry Potter, so we know how the war will end," Zelensky said, smiling.

Zelensky, 44, a former comedian who once played a fictional president in a popular TV series before entering politics, has drawn international praise for refusing to leave Ukraine during the war and for rallying Ukrainians to resist the invasion.

Russia calls its actions in Ukraine a "special military operation" to disarm the country and rid it of "fascists". Ukraine and its Western backers say this is a false pretext for waging an unprovoked war of aggression.