Contact Us
News World Russia-Ukraine War: What to know on Day 7 of Russian assault

Russia-Ukraine War: What to know on Day 7 of Russian assault

On Day 7 of the Russia-Ukraine conflict, Russia continued its attacks on crowded Ukrainian cities and a lengthy convoy of Russian tanks and other vehicles advanced slowly toward the capital of Kyiv.

Russia's escalation Wednesday came as President Joe Biden, in his State of the Union speech to Americans, warned that if the Russian leader didn't "pay a price" for the invasion, the aggression wouldn't stop with one country.

Here's a look at key things to know about the conflict:

A Kremlin spokesman said a Russian delegation will be ready Wednesday evening to resume talks with Ukrainian officials about the war in Ukraine Spokesman Dmitry Peskov told reporters that "in the second half of the day, closer to evening, our delegation will be in place to await Ukrainian negotiators."

THE CONVOY TO KYIV 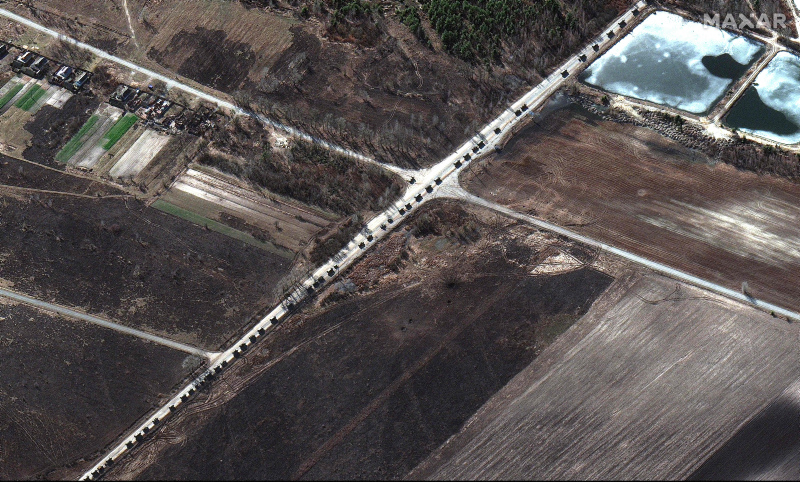 A 40-mile (64-kilometer) convoy of hundreds of Russian tanks and other vehicles advanced slowly on Kyiv, a city of nearly 3 million people. The West feared it was part of a bid by Putin to topple the government and install a Kremlin-friendly regime. The Russians also pressed their assault on other towns and cities, including the strategic ports of Odesa and Mariupol in the south.

A senior U.S. defense official said Russia's military progress has slowed, plagued by logistical and supply problems. Some Russian military columns have run out of gas and food, the official said, and morale has suffered as a result. The Russian military has also been stalled by fierce resistance on the ground and a surprising inability to completely dominate Ukraine's airspace. 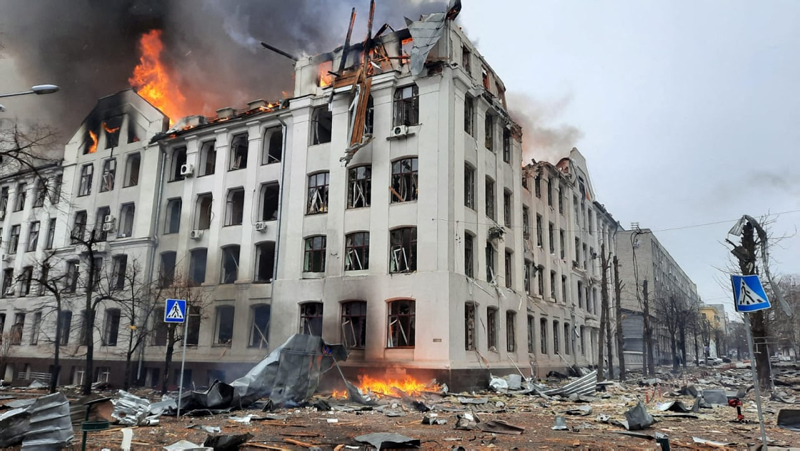 The strike blew off the roof of the police building and set the top floor on fire, and pieces of the five-story building were strewn across adjacent streets, according to videos and photos released by the emergency service.

In Wednesday's strikes, four people died, nine were wounded and rescuers pulled 10 people out of the rubble, according to the service. 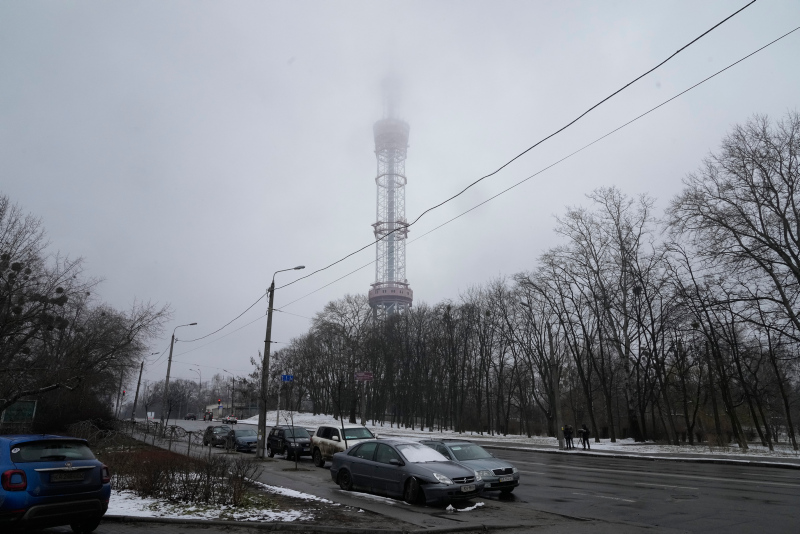 On Tuesday, a deadly bombing targeted a TV tower in the capital. Ukrainian authorities said five people were killed in the attack. A TV control room and power substation were hit, and at least some Ukrainian channels briefly stopped broadcasting, officials said.

Russia's Defense Ministry claimed Wednesday that Russia disabled the main TV tower in an airstrike, but said the attack did not hit any residential buildings. Ministry spokesman Igor Konashenkov did not address the deaths from Tuesday's strike. He said the attack was aimed at disabling Ukraine's ability to stage "information attacks." 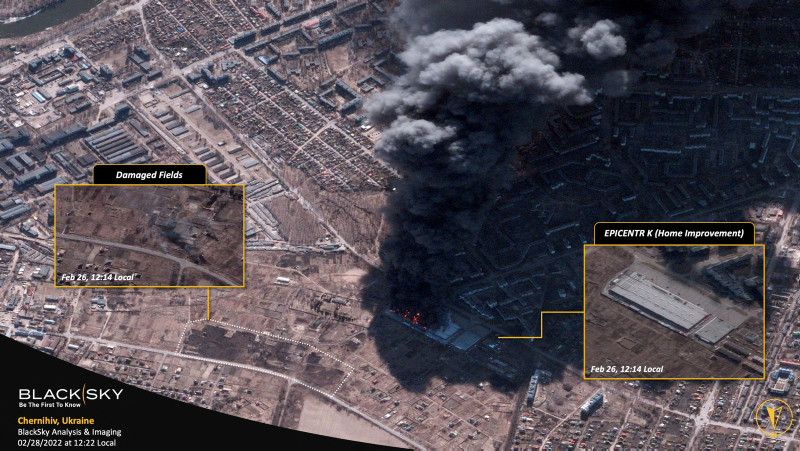 The Ukrainian UNIAN news agency quoted the health administration chief of the northern city of Chernihiv as saying two cruise missiles hit a hospital there. The hospital's main building suffered damage, Serhiy Pivovar said, and authorities were working to determine the casualty toll. No other information was immediately available

Britain's Defense Ministry said it had seen an increase in Russian air and artillery strikes on populated urban areas over the past two days. It also said three cities — Kharkiv, Kherson and Mariupol — were encircled by Russian forces. 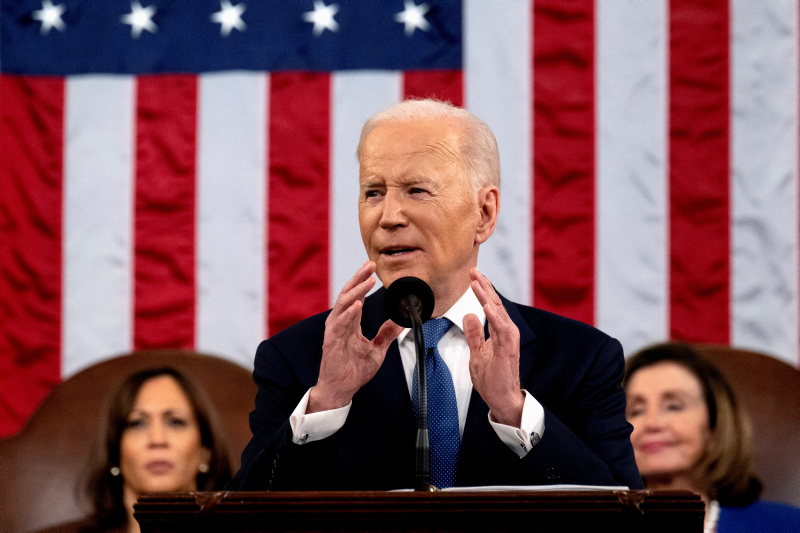 Biden used his firs t State of the Union address to highlight the resolve of a Western alliance that has worked to rearm the Ukrainian military and adopt tough sanctions — including closing U.S. airspace to all Russian flights.

Biden devoted the first 12 minutes of his address to Ukraine, with lawmakers of both parties repeatedly rising to their feet and applauding as he praised the bravery of Ukraine's people and condemned Putin's assault. 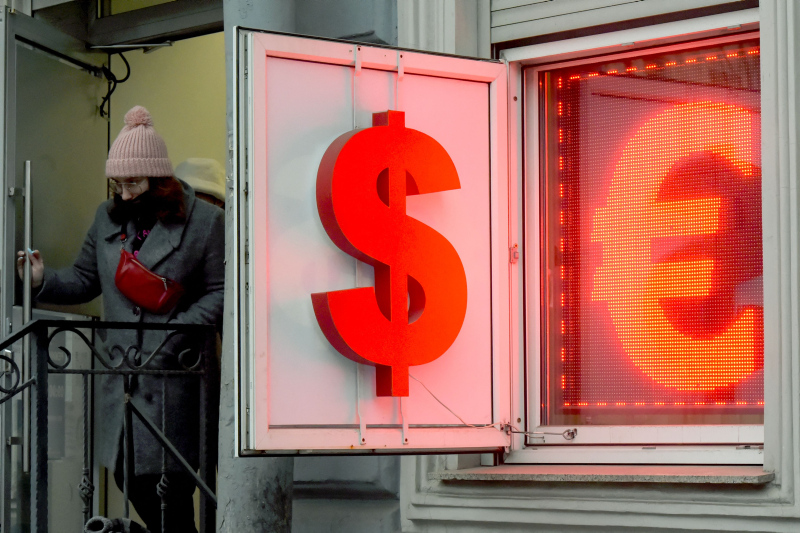 Russia found itself increasingly isolated, hit by sanctions that have thrown its economy into turmoil and left the country practically friendless, apart from a few nations like China, Belarus and North Korea. Biden said the sanctions have left Russian President Vladimir Putin "isolated in the world more than he has ever been."

Leading Russian bank Sberbank announced Wednesday that it is pulling out of European markets amid tightening Western sanctions. The bank said its subsidiaries in Europe were facing an "abnormal outflow of funds and a threat to the safety of employees and branches," according to Russian news agencies. They did not provide details of the threats.

The U.S. and EU have levied sanctions on Russia's biggest banks and its elite, frozen the assets of the country's Central Bank located outside the country, and excluded its financial institutions from the SWIFT bank messaging system.

The harsh sanctions and the resulting crash of the ruble have the Kremlin scrambling to keep the country's economy running. For Putin, that means finding workarounds to the Western economic blockade.

Former Treasury Department officials and sanctions experts expect Russia to try to mitigate the impact of the financial penalties by relying on energy sales and leaning on the country's reserves in gold and Chinese currency. Putin also is expected to move funds through smaller banks and accounts of elite families not covered by the sanction s, deal in cryptocurrency and rely on Russia's relationship with China. 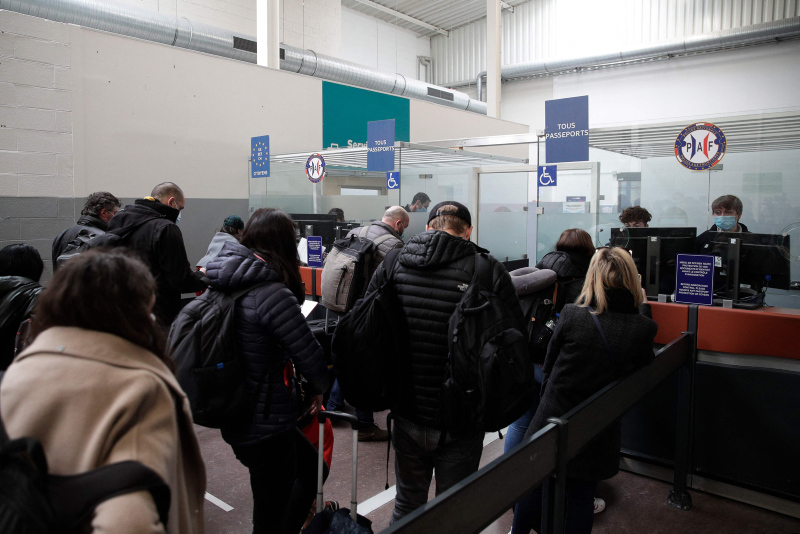 It's worsening. Roughly 874,000 people have fled Ukraine and the U.N. refugee agency warned the number could cross the 1 million mark soon. Countless others have taken shelter underground.

Ukraine's State Emergency Service said more than 2,000 civilians have died, though it was impossible to verify that claim. The U.N. human rights office says it has recorded the deaths of 136 civilians, including 13 children, in Ukraine since the start of Russia's invasion on Feb. 24.

The European Union is stepping up aid for Ukraine and is moving toward granting temporary protection to those fleeing Russia's invasion. The EU Commission announced Wednesday it will give temporary residence permits to the refugees and allow them rights to education and work in the 27-nation bloc. The move still has to be approved by the member states, but they already expressed broad support over the weekend.

Human Rights Watch said it documented a cluster bomb attack outside a hospital in Ukraine's east in recent days. Residents also reported the use of the weapons in Kharkiv and Kiyanka village. The Kremlin denied using cluster bombs.

DEVELOPMENTS AT THE UNITED NATIONS

The U.N. General Assembly will vote Wednesday on a resolution demanding that Russia immediately stop using force against Ukraine and withdraw its military from the country, and condemning Moscow's decision "to increase the readiness of its nuclear forces."