"The OSCE Minsk Group, which has not been able to find a solution to the Nagorno-Karabakh issue for 30 years, has been brain-dead,"  Turkey's parliament speaker Mustafa Şentop said in his address on Tuesday as delivering a speech at the Azerbaijani parliament in the capital Baku.

Turkey's parliament speaker on Tuesday slammed the OSCE Minsk Group over ongoing Azerbaijan-Armenia crisis, saying that the group is "brain-dead".

"The OSCE Minsk Group, which has not been able to find a solution to the Nagorno-Karabakh issue for 30 years, has been brain-dead," said Mustafa Şentop at the Azerbaijani parliament in the capital Baku.

The OSCE Minsk Group -- co-chaired by France, Russia, and the US -- was formed in 1992 to find a peaceful solution to the conflict, but to no avail. 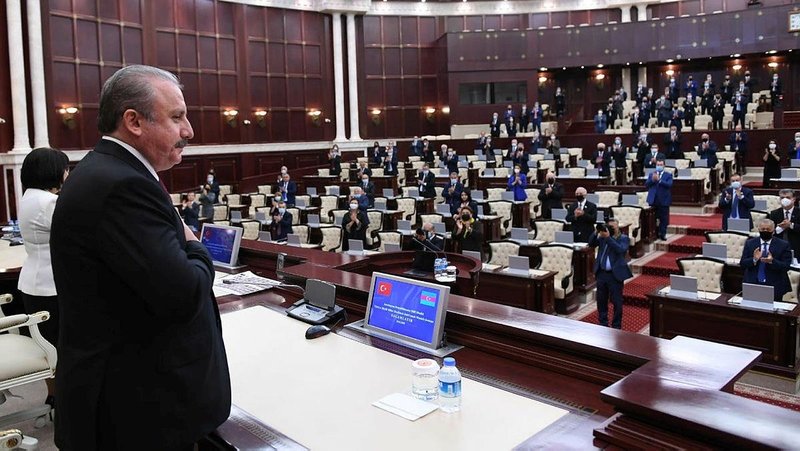 Armenia has "become a regional and a global problem", Şentop said, noting: "Deadlock in the Caucasus will continue as long as Armenia's occupation in Nagorno-Karabakh and surrounding areas continues."

Şentop and Bayramov discussed the ongoing crisis between Azerbaijan and Armenia, and addressed Azerbaijan's operations to rescue its occupied lands.

Relations between the two former Soviet republics have been tense since 1991, when the Armenian military occupied Upper Karabakh, an internationally recognized territory of Azerbaijan.

Fresh clashes erupted on Sept. 27, and Armenia has since continued its attacks on civilians and Azerbaijani forces, even violating humanitarian cease-fire agreements.

Turkey has supported Baku's right to self-defense, and demanded a withdrawal of the occupying forces.