A great number of UK citizens gathered in the capital city of London to protest persecution against Rohingya Muslims in Myanmar on Saturday. The protesters held pictures, placards and banners all condemning the latest atrocities against the Muslim minority by Myanmar's army and government during the rally.

"Stop Rohingya Genocide" was the common slogan during a protest in front of the government offices at 10 Downing Street in the British capital, London on Saturday.

Around 200 people staged a protest holding pictures, placards and banners all condemning the latest atrocities against the Muslim minority by Myanmar's army and government. 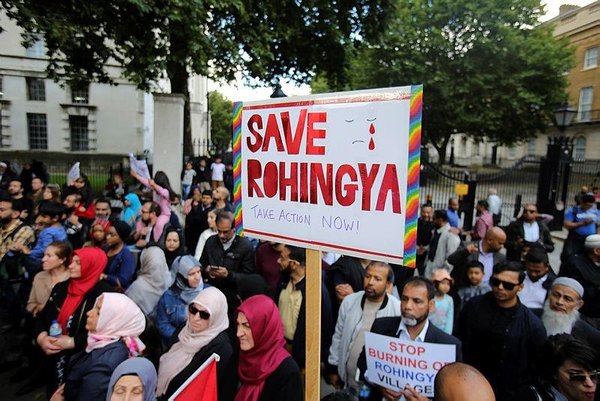 "This is anger! We are expressing our anger against the Burmese government who is doing genocide against our people," Nurul Islam, the president of Arakan Rohingya National Organization (ARNO), told Anadolu Agency.

"We want to draw attention of the U.K. government, being a member of the [UN] Security Council and a powerful country," he said.

"The U.K. government must intervene now," he added. 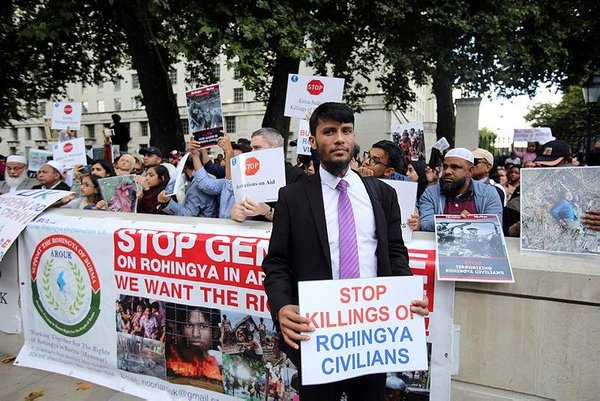 Some of the placards read "Stop Genocide on Rohingya in Arakan", "Stop Restriction of Aid", and "UK Condemn do not Deny Rohingya Genocide!"

Some protesters held graphic photos of the victims killed during the latest atrocities targeting Rohingya civilians.

"We don't want to live a life of humiliation as refugees and as beggars in Bangladesh or elsewhere. We want to live in our own homeland and die in our homeland," Islam added. 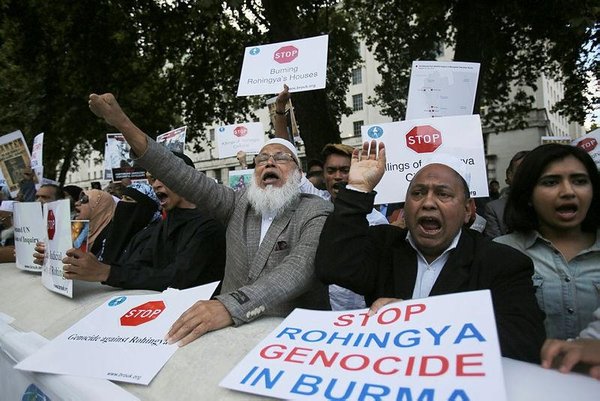 "It is important that a safe zone is created inside Arakan. Humanitarian intervention is necessary," he said. 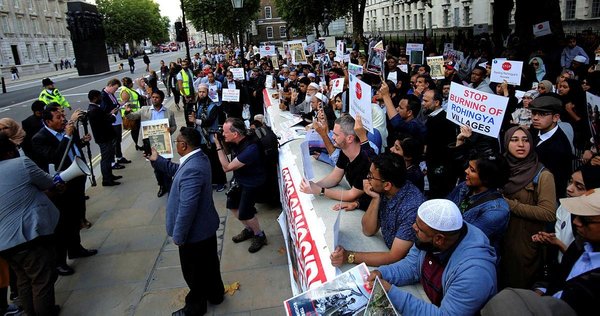 -NEED FOR UN INTERVENTION
The UK Burma Rohingya Organization President Tun Khin also spoke to Anadolu Agency and underlined the necessity of an urgent UN intervention in the region. 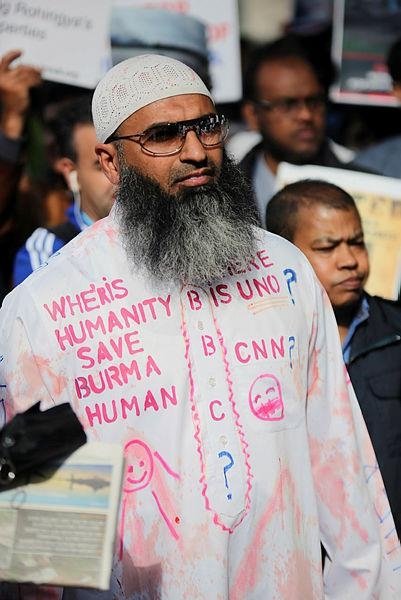 Another protester, a refugee from Arakan, Mohammed Nouri told Anadolu Agency that he came to the U.K. from Myanmar with his family in 1992. 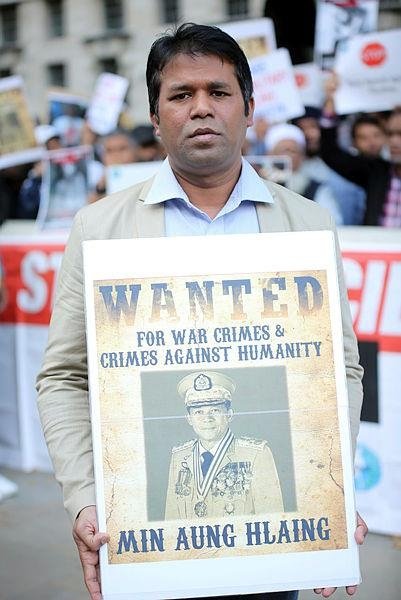 "We, Rohingya people are feeling very proud of them who went there and supported this minority people," Nouri said, referring to the visit to the region by Turkish first lady Emine Erdoğan and Foreign Minister Mevlüt Çavuşoğlu.

"We are thankful to the Turkish president who is showing us humanity and sympathy," he added. 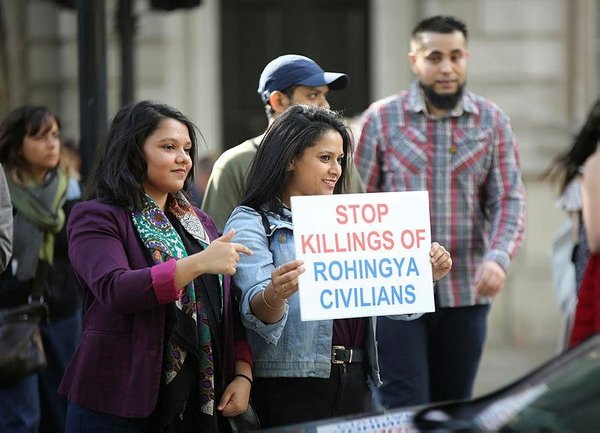 Shimul Sultana, a Bangladeshi protester said she was at the protest to, "fight for the Rohingya people because there's no one else out there to fight for them" and to protest because, "especially this genocide is going on."

"This time they are just ethnic cleansing the people… We are thankful to Turkish government for standing up to Burmese government but we need all the other countries to step up and face it." 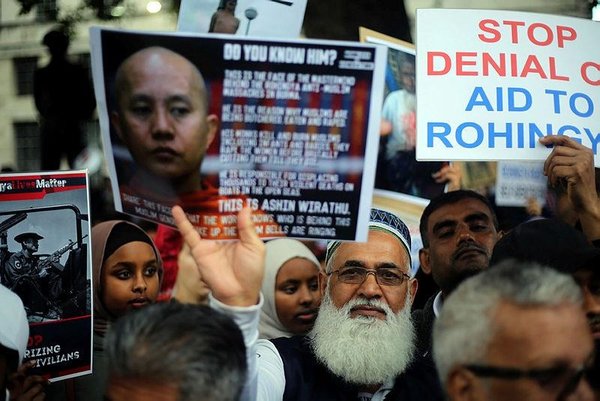 A Budhist protester Maung Zarni said he was at the protest, "to tell the truth about the Rohingya people."

"My own country has disowned them and treated them as a subject of genocide for the last 40 years," Zarni, an academician from Myanmar told Anadolu Agency.

"I am here to tell the world that Rohingya are not terrorists… they are our own people… and that the Burmese military adopted anti-Muslim and racist policies against the Rohingya." 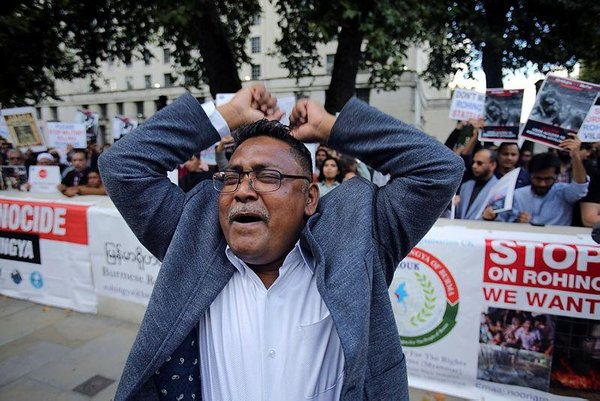 "I am here to tell the British government that they have blood on their hands because they are training the killer military, they are supporting Aung San Suu Kyi."

The commission headed by the former UN chief recommended the government in Myanmar ensure full humanitarian aid access across Rakhine, persecute human rights violators, end restrictions of movement and segregation as well as "revisit" the Citizenship Law of 1982.

More than 250,000 Rohingya refugees have fled to Bangladesh in the last two weeks to evade persecution in Myanmar, the UN said Friday. 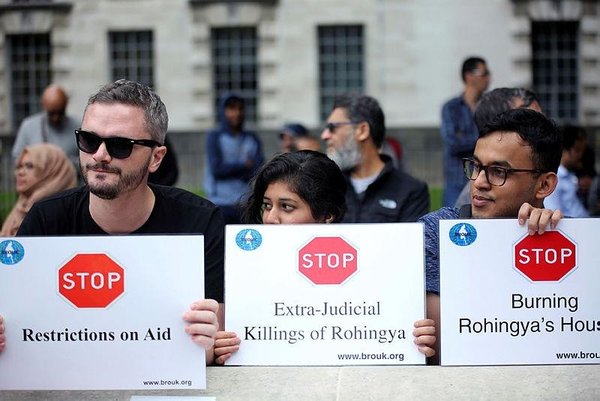 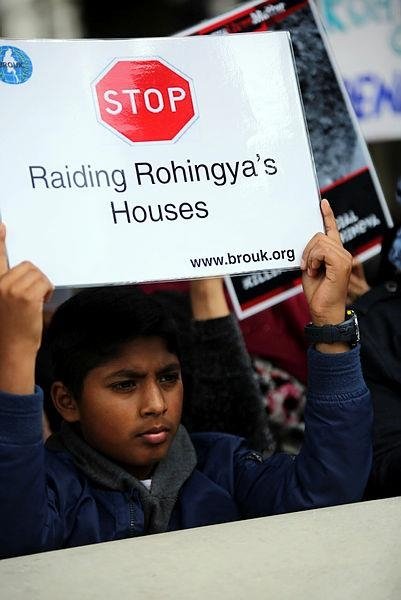 Last October, following attacks on border posts in Maungdaw, Myanmar security forces launched a five-month crackdown in which, according to Rohingya groups, around 400 people were killed.

The UN has documented mass gang rapes, killings -- including those of infants and young children -- brutal beatings, and disappearances committed by security personnel.