"The landing was a huge success as [Hayabusa2] made a perfect move almost in line with our expectations," said Takashi Kubota, a professor at JAXA's Institute of Space and Astronautical Science told Japan's Kyodo news agency.

The asteroid is about 250 million kilometers away from Earth and the successful mission is said to be of considerable scientific and strategic significance. 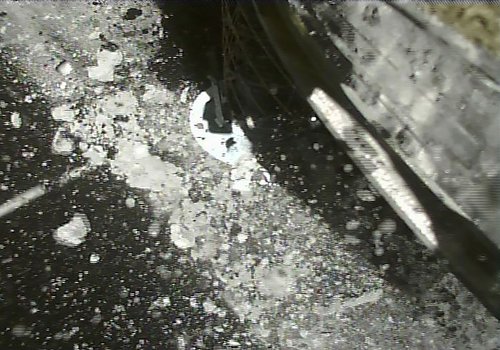 The mission is believed to have collected first-ever asteroid subsurface samples, the report said.

"The debris collected this time by the probe will help gain new insight into the origins of life and the evolution of the solar system," Japan Aerospace Exploration Agency (JAXA) said.

Early in April, Hayabusa2 space probe shot a projectile at the Ryugu asteroid around 340 million kilometers from Earth creating a man-made crater on an asteroid.

The mission aimed at exploring the origin of life and the evolution of the solar system.

"Ryugu's surface has weathered due to the impact of solar winds, but the subsurface samples are believed to contain traces of the time when the solar system was created 4.6 billion years ago. These dark-colored samples may contain organic materials and water," JAXA added.

The space agency said that it takes 14 minutes to transmit information between the Earth and the probe.

After the probe started its descent on Wednesday and collected the samples, "the probe's mission is almost complete, and it will start its journey back to Earth at the end of this year," Kyodo said.

Hayabusa2 reached its stationary position above Ryugu in June last year after traveling 3.2 billion km. It is expected to return to Earth in winter 2020.

Launched in December 2014 from the Tanegashima Space Center in southwestern Japan, Hayabusa2 reached Ryugu last June. It touched down in February to collect surface samples and found hydrated minerals that will help scientists determine whether asteroids brought water to Earth as hypothesized.