Preserving the status quo or going deeper in supply cuts are among the options for the oil cartel OPEC at Thursday's meeting, which will revolve around discussions on Russian concerns, the Aramco IPO and U.S. shale production growth

While people are getting into the holiday spirit, the markets are also bracing for another December tradition – the meeting of the Organization of the Petroleum Producing Countries (OPEC).

For the 177th time, the ministers of oil-producing countries will be discussing in Vienna on Thursday how much they will cut the oil supply to preserve the fiscal breakeven price while the supply expansion is likely to outbid the demand growth throughout next year. While Saudi Arabia will be announcing the share price for Aramco's initial public offering (IPO) on the kingdom's stock market on the same day as the OPEC meeting, Russia will be pursuing its own agenda to exclude gas condensate production from supply quotas. Without a doubt, the continuously increasing shale production in the U.S. will also make heavy weather for the ministers in Vienna. 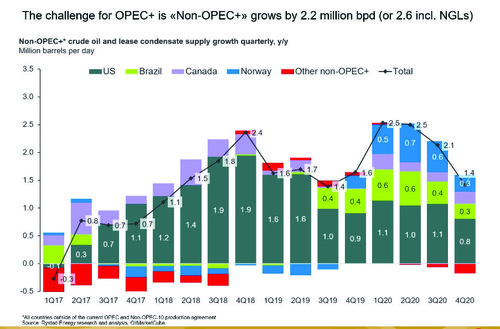 The oil markets have witnessed some dramatic events this year. Sanctions on Iran and the end of waivers for buyers of Iranian crude, the September drone attacks on Aramco's Abqaiq and Khurais facilities taking out 5.7 million barrels per day (bpd) and prolonged U.S.-China trade wars have been the most influential events on the oil markets.

After an eventful year, OPEC is looking to extend the current level of cuts at 1.2 million bpd, which will expire in March 2020, into June 2020. Some analysts even predict that the cartel might decide on a cut as high as 1.6 million bpd, arguing that it will be necessary if the prices should remain around $60 per barrel.

Rystad Energy – an Oslo-based energy intelligence company – maintains that there is no room for OPEC to raise production next year if the oil price environment is preserved at $60 Brent. 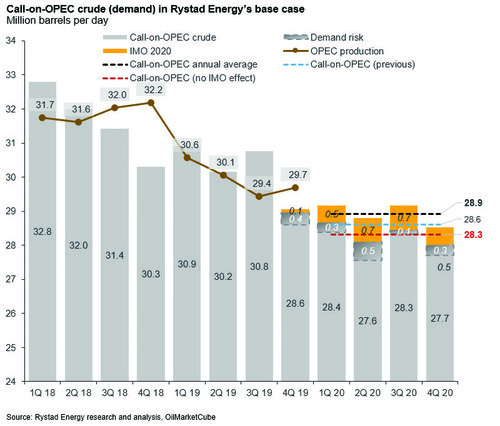 "We have a clear message to the OPEC+ countries: A 'roll-over' of the current production agreement is not enough to preserve a balanced market and ensure a stable oil price environment in 2020," Bjornar Tonhaugen, head of oil market research at Rystad Energy, said at a recent webinar. "The outlook will be bleak if OPEC+ fails to agree on additional cuts," he claimed.

"Even with a positive IMO (International Maritime Organization) 2020 effect on crude demand in our base case of 0.6 million bpd, our 2020 call-on-OPEC is only 28.6 million bpd," Rystad estimated. 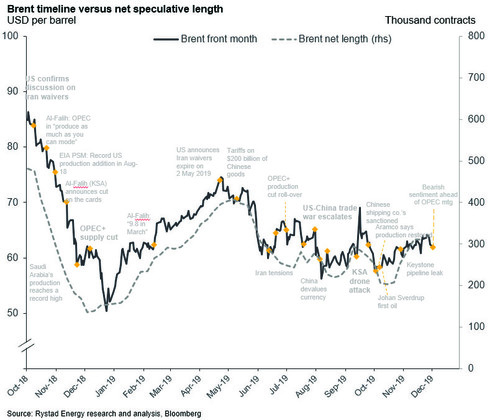 Effective on Jan. 1, 2020, IMO will impose new emissions standards designed to significantly curb the pollution produced by the world's ships. The limit for sulfur in fuel oil used on board ships operating outside designated emission control areas will be reduced to 0.50% mass on mass.

IMO 2020 is expected to support the crude but still, the liquids market will remain oversupplied.

"However, if the 600,000 bpd IMO effect we predict doesn't materialize, the cut would need to be 1.4 million from November levels," Rystad argued in a monthly report.

Rystad's head of oil market research claimed that the empirical data points out an additional surplus of 1 million bpd of oil from the OPEC producers. This additional supply is likely to reduce the oil prices 5% per month, he explained. "If OPEC and Russia don't extend and deepen their cuts, we could see Brent blend dip to $40 next year for a shorter period," Tonhaugen said. Rystad's data suggest that non-OPEC supply driven by Norway, the U.S., Brazil, Canada and some other oil producers and will increase production to 2.2 million bpd.

As opposed to supply growth from OPEC and non-OPEC producers, 2020 liquids demand growth forecast at 1 million bpd, per Rystad and 1.4 million according to the International Energy Agency (IEA). In its November report, OPEC predicted that oil demand growth is forecast at 1.08 million bpd.

OPEC's largest oil producer Saudi Arabia has already signaled that it is likely to seek further cuts at Thursday's meeting as the de facto leader of the OPEC will announce the share price on the same day as the agreement. After the September attacks, Aramco managed to restore its production capacity to pre-attack levels at 9.7 million bpd in October.

Just as they are about to announce Aramco's long-awaited public offering, the Saudi delegation could also be hesitant in taking any dramatic action and making statements that could unsettle the market, Ian Nieboer, the managing director of the Calgary-based RS Energy Group, told Daily Sabah.

"Saudi behavior will be important to watch after the meeting and after a successful listing. How they modulate their production relative to their target, as they have done throughout 2019, will be an important signal for intentions and market perspective as well as whether the broader OPEC+ group is complying to an acceptable level," Nieboer explained.

OPEC+ has cut oil production by 2.6 million bpd year-to-date compared to October 2018 reference levels and the target cut of 1.2 million bpd per the current agreement. The additional 1.4 million bpd cut has not stemmed from voluntarily abiding by the agreement and over market concerns. But it has been fuelled by Venezuela and Iran – both of which are exempt from the cuts. Saudi Arabia has led the group's compliance by cutting 870,000 bpd in 2019 as opposed to the target cut of 322,000 bpd.

Pointing out the still unclear strategy of the Aramco IPO, Serkan Şahin, a teaching fellow at Bilkent University Energy Policy Research, emphasized that the company's risk premium is still high following the attacks on its upstream facilities.

In reference to the Aramco IPO prospectus, highlighting that the company does not conceptualize itself as solely an upstream business but is planning to expand its operations in the downstream and petrochemical arms, Şahin stressed that this vision on the company will be influential on the public offering. Therefore, he claimed, Aramco's IPO might not be targeting a high oil price environment and will be less likely to have clout over the meeting.

"More importantly, Saudi Arabia would like to show their firmness on their output capacity following the September attacks so they could be cautious that any additional demand for more capping in supply could be translated in public as an outcome of vulnerability due to the attacks," Şahin opined.

On a different note, Rystad Oil Market Research Head Analyst Bjornar Tonhaugen stressed that Saudi Arabia signaled that it will seek stricter compliance by other producers and is no longer willing to shoulder the burden of sub-compliance by others, such as Russia, Iraq and Kazakhstan, which have all failed to reach 100% compliance with their target cuts.

Russia – the other champion of the 3-year-old alliance to curb the oil glut – has been drifting apart from the agreement. The country failed to deliver the agreement commitments as it exceeded the production target in eight of the last 11 months.

Albeit responsible for more than half of the non-OPEC curbs, Russia refrained from full compliance and made more money, about $670 million a day, the IEA said in an October report.

Bloomberg data showed that Russia's compliance with the target production remained 80% – in a benchmark framework where 100 is full compliance – while that of Saudi Arabia, Ecuador, Kuwait and Bahrain was calculated at 231%, 519%, 159% and 320%, respectively.

"Russia's compliance as part of OPEC has thus far been largely superficial and they have continued to manage production growth even while being part of the group," Nieboer of RS Energy Group said.

"Russian reluctance has already been evident in the Energy Minister Alexander Novak's comments that OPEC should wait until the current agreement's expiry date and his suggestions that the agreement should make a suggestion between condensates and crude," he added.

Unlike Saudi Arabia and other OPEC producers, Russia has been including condensate – a high-premium light type of crude oil mainly extracted during gas production – in its crude oil production numbers. Since the gas condensate production is on the rise with the new fields in the Arctic and East Siberia and given the new pipeline to China, Russia will try to engineer the agreement and has already offered a change in the rules to exclude its condensate production. The Russian crude production was calculated at 11.27 million bpd in December, according to Rystad calculations. The country had promised to cut the production 228,000 bpd to about 11.18 million bpd under the current agreement.

"I expect that Russia would remain cooperative unless a marginal demand would come from OPEC counterparts," Şahin remarked.

Citing the strong supply of the country in Europe and China, he emphasized that the stagnating demand in India could be a problem for market expectations.

"Any decision to remove output capping in OPEC+ agreement could result in a sudden decline in oil prices. I believe Russia would be cautious in making a quick diversion from its OPEC alliance," he further explained.

Despite a slightly downgraded production outlook for 2020, the U.S. is estimated to add 1.13 million bpd to its supply performance. The supply growth from the U.S. and the price flexibility of shale oil production have been a concerning issue for OPEC producers.

"There is a lot of interest and concern about how U.S. shale production will respond to prices and their decision. There is both the fear that higher prices will stimulate another leg of growth, while others suggest that the days of rapid U.S. production growth are gone," said Nieboer and noted that RS Energy Group estimates that if the prices were to sustainably rise to $70 per barrel Brent and WTI hovers below $60, strong U.S. production growth will return.

The U.S. reached a new energy-producing milestone by exporting more crude oil and petroleum products than it imported per day since 1949. During September, the country sent out 89,000 barrels a day more than it brought in, according to official data from the U.S. Energy Information Administration (EIA).

Moreover, the IEA Oil Outlook 2019 report also forecasts that the U.S. will become a net exporter by 2024 as its crude and product exports exceed its imports. By 2024, the U.S. gross exports will reach 9 million bpd, overtaking Russia and catching with Saudi Arabia.

In order to deal with the growing supply from the U.S., former Saudi Oil Minister Ali Al-Naimi crushed oil prices in 2014 by fueling the oversupply. However, ahead of U.S. elections, a similar move remains unlikely. Therefore, these circumstances compel OPEC and allies to create a framework that will keep the prices above $60 and below $70 per barrel.

Bringing in another perspective of the oil trade into the U.S. Şahin explained that U.S. domestic medium and light crude oil output has been strong which could counter OPEC imports into the country, mainly from Iraq, Saudi Arabia or Nigeria. "Gulf of Mexico production seems to be potentially pivotal in OPEC's upcoming meeting with its influence on U.S. crude oil imports and mid-distillate product exports," he said.