"No network of traitors, no terrorist organization will disrupt unity, solidarity, brotherhood in Turkey," Turkish President Recep Tayyip Erdoğan said in his address to crowd of thousands of Istanbulites, who flocked to Yeşilköy Airport to mark 3th anniversary of foiled coup attempt on July 15 in 2016.

Speaking during an Istanbul gathering on Monday to mark the third anniversary of bloody July 15 coup bid, Turkish President Recep Tayyip Erdoğan said in his address: "No network of traitors, no terrorist organization will disrupt unity, solidarity, brotherhood in Turkey."

"On the night of July 15, they wanted to bury Turkey into darkness but failed, Allah ruined their traps," Turkish president added. 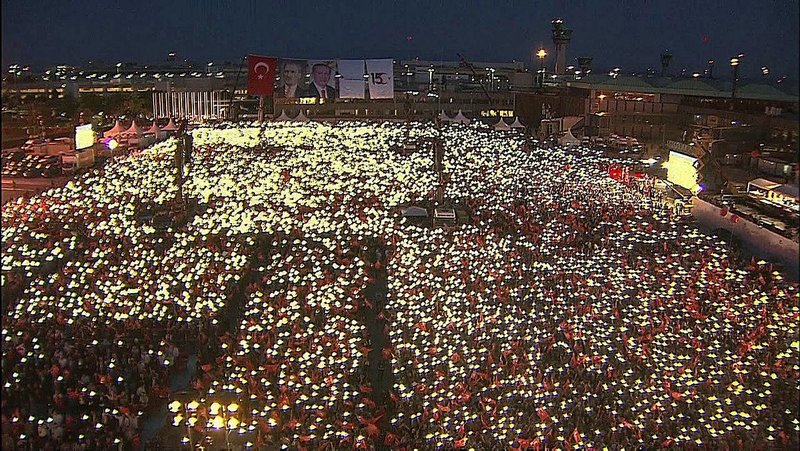 "I salute every member of our heroic nation, who stood against planes, tanks, bullets to protect the independence of our nation and the future of our country on July 15," he said.

In his speech, Erdoğan applauded the soldiers and staff of the Turkish Armed Forces.

"I would like to express my gratitude on behalf of myself and my nation to our media, non-governmental organizations and intellectuals for setting an example to the world," Erdoğan said.

Turkey marks July 15, 2016 as Democracy and National Unity Day. The day is commemorated with events honoring those who lost their lives beating back the putschists and in remembrance of the the bravery of the nation.

Ankara accuses FETO of being behind a long-running campaign to overthrow the legitimate state apparatus, through infiltrations into Turkish institutions, particularly the military, police, and judiciary.

"RUSSIAN S-400S WILL BE FULLY DEPLOYED BY APRIL 2020"
Erdoğan also said that the Russian S-400 missile defence system, parts of which have been delivered to Turkey over the past four days, is expected to be fully deployed in April 2020.

Turkey's purchase of the Russian system has raised tensions with the country's NATO allies, particularly the United States, which has warned Turkey the move would trigger U.S. sanctions.