The newly-elected headman of a small neighborhood in southeastern Turkey's Bitlis province has started a reading hour for children on the streets of his neighborhood.

Cengiz Aslan, who was elected headman of Bahçelievler neighborhood in Hizan district in the March 31 local elections, can be spotted on a different street in the neighborhood each evening, reading with a group of children.

Aslan graduated with a degree in history and is a teacher who has not yet been appointed to a post at a public school. But his lack of classroom hasn't stopped him from educating.

"The aim of this activity is to make children and young people love books, to expand their horizons. At the same time, we started this activity to show what books add to people, to encourage children to love reading more, for it to be beneficial for our country, our homeland and our nation," Aslan told Ihlas News Agency. 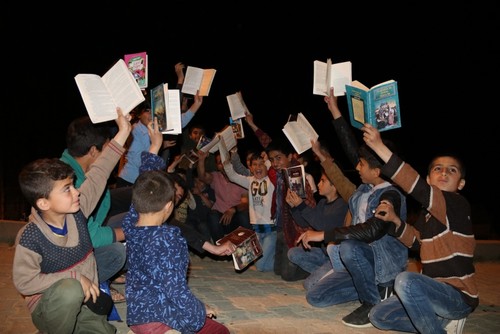 Aslan says he believes books have an impact on children's moral development. "Generations that grow up reading books are respectful, reverential and humane," he said, adding, "I believe these qualities can be developed and spread everywhere."

The residents of the neighborhood are happy to see Aslan's reading program, and some have joined him in reading with the children.

Aslan said he would rather be a classroom teacher than a headman, but since he hasn't been appointed to a position, he decided to serve as headman.

"I can easily say that the streets are my classroom. These children and youth are my students. I'm going to continue instill love of books upon them," Aslan said.

Aslan encouraged other headmen across Turkey to undertake similar activities on the streets of their neighborhoods. "Books should definitely be in our lives'' he said.