Turkey, since becoming a NATO member in 1952, has been one of the most intensively contributing cogwheels of the organization, presenting its abilities and capabilities to the command and force structure of the alliance.

Ahead of NATO's defense ministers meetings to be held on Feb. 13-14 in Brussels, Anadolu Agency compiled Turkey's contributions to the alliance.

To begin with, Turkey is among the member countries that contributed most to NATO budget. In 2018, Turkey contributed €89.8 million ($101 million) to the common funding of NATO. 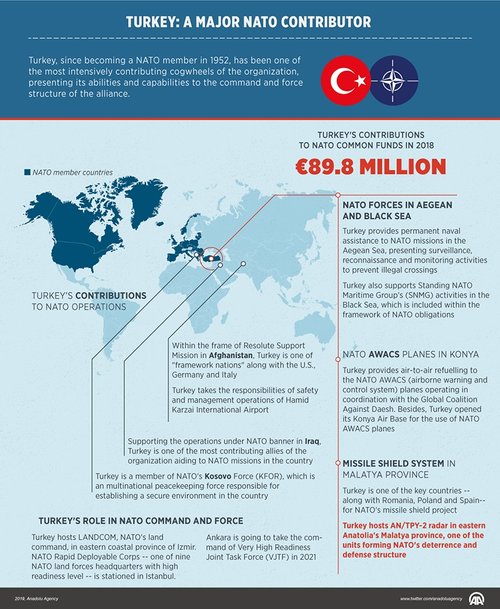 In addition to being a direct target of terror threat, Turkey, due to its geostrategic location, is directly affected by the security challenges emerging in Europe-Atlantic geography.

While fighting these risks and threats with its national abilities and capabilities, Turkey also strengthens its defense and security abilities in NATO while contributing to the collective defense sense of the alliance.

Given that Turkey is one of the biggest contributors to NATO mission and operations, it plays a significant and crucial role in the organization.

Within the frame of Resolute Support Mission in Afghanistan, Turkey is one of "framework nations" along with the U.S., Germany and Italy.

In this context, Turkey is the leading country in Kabul region. Also, it takes the responsibilities of safety and management operations of Hamid Karzai International Airport.

Turkey is a member of NATO's Kosovo Force (KFOR), which is a multinational peacekeeping force responsible for establishing a secure environment in the country.

Supporting the operations under NATO banner in Iraq, Turkey is one of the most contributing allies of the organization aiding to NATO missions in the country.

Ankara leads the regional initiatives held by the assistance and participation of the regional countries in the Black Sea.

Turkey also supports Standing NATO Maritime Group's (SNMG) activities in the Black Sea, which is included within the framework of NATO obligations.

Turkey provides air-to-air refuelling to the NATO AWACS (airborne warning and control system) planes operating in coordination with the Global Coalition Against Daesh. Besides, Turkey opened its Konya Air Base for the use of NATO AWACS planes.

Beside that, it also provides permanent support to NATO's Standing Maritime Second Group and Mine Countermeasures Group.

Turkey is one of the key countries -- along with Romania, Poland and Spain-- for NATO's missile shield project.

While the radar base is in Turkey, the control center of missile shield located in Malatya province is in Germany. In line with the system, if a threat is detected and Germany issues command, the missiles to be launched from Romania are expected to hit the target.

Ankara is going to take the command of Very High Readiness Joint Task Force (VJTF) in 2021.

NATO created the VJTF during the 2014 Wales Summit in the U.K. as a "spearhead force" within the NATO Response Forces against risks and threats that might arise in Russia, Middle East, and North Africa.

With the aim of responding to new challenges to emerge, in line with NATO's "Partnership Policy", Turkey supports or leads the partnership mechanisms established by various countries and international organizations.

In this context, Turkey provides financial or expertise assistance to 17 of 20 NATO trust fund projects. Turkey assists Georgia, Moldova, Jordan and Iraq with fundings and expertise.

Turkey is one of the NATO allies that provided the most contribution to NATO Iraq mission.

Besides, Turkey actively backs NATO's policy of expansion. Turkey supports the inclusion of Georgia, Bosina and Herzegovina, Macedonia into NATO.