Turkey's helping hand reached out to Iran and Colombia as both countries struggle with floods that have displaced many. The Turkish Red Crescent and TİKA delivered aid to flood victims in both countries

Five trucks carrying humanitarian aid supplied by the Red Crescent headed to Iran through the Gürbulak border crossing yesterday. At least 45 people were killed this week in flash floods in northern and southern Iran after the heaviest rains recorded in Iran in at least a decade. Another 265 people were injured. Iranian officials said on Saturday it faced an emergency in a southwestern province threatened by flooding and worked to evacuate dozens of villages as forecasters predicted more heavy rains. Some 56 villages lying near the Dez and Karkheh rivers in the oil-rich southwestern province of Khuzestan may have to be evacuated as officials released water from two major dams along the rivers due to forecasts for more rain, Provincial Governor Gholamreza Shariati told state television. 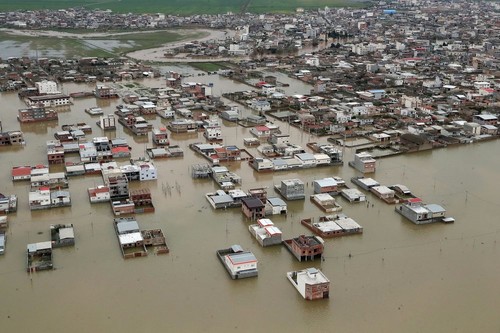 The Turkish Red Crescent cooperated with the Iranian Red Crescent to deliver aid to those displaced by the floods. The aid includes 320 tents, 500 beds, 100 hygiene kits, 1,625 blankets, 360 sets of kitchen utensils and 60 heaters. Anıl Kocabal, who heads the Red Crescent delegation to Iran tasked with aid delivery, told Anadolu Agency (AA) that they also launched a donation campaign to help the people of Iran affected by the disaster. "Our first delivery will be an accommodation kit (tents) to 320 families. We cooperate with the Iranian Red Crescent so that we can reach out to everyone affected by the disaster," Kocabal said.

Western and southwestern parts of Iran are expected to bear the brunt of the storms in the days ahead. Police renewed calls for people to avoid unnecessary journeys even though Iran is celebrating the Nevruz New Year holiday, a time when many families travel. Iran has implemented measures to prevent rain and flooding affecting its main crude oil export terminal on Kharg Island in the Gulf, the head of the Iranian Oil Terminals Company told the semi-official news agency Mehr on Saturday.

In Colombia, TİKA delivered stationary sets to students and humanitarian aid to locals in Istmina, a town hit by floods in February and earlier this month. Istmina is located in Colombia's Choco Department where the San Juan River overflowing its banks during floods led to inundation of settlements around it. More than 7,000 people lost their homes in the disaster. There have been calls for aid to the region, especially for a population living in poverty. TİKA officials delivered stationary sets including books and notebooks to 140 students at Andres Bello primary school and agricultural equipment to people of Primavera where farmers suffered losses in floods. Two years ago, TİKA was behind another humanitarian project for victims of floods that hit southern Colombia and sent 200 aid packages to the southern city of Mocoa.

TİKA, the country's leading development aid institution, boasts a decade of increased outreach to Latin America, with 172 projects spanning Venezuela to rural Colombia. The agency left its mark in Latin American countries with a string of projects from schools to training women for employment. It serves as one of the key players in Turkey's efforts to boost its ties with regional countries, offering both instant humanitarian aid and projects focusing on development in the long run, ranging from education, health and agriculture to infrastructure.