Hosting the world's largest number of refugees, 1.6 million of which are children, Turkey is an exemplary country for its welcoming and assisting approach

The United Nations International Children's Emergency Fund's (UNICEF) representative in Turkey, Philippe Duamelle, said that Turkey's ongoing efforts for Syrians are welcome. Furthermore, Duamelle stressed that UNICEF, along with other partners, supports the Turkish government's efforts to prevent a lost generation of refugee children by putting great emphasis on education. In an exclusive interview with Daily Sabah, Duamelle said that the Turkish government has played an exemplary role in welcoming and assisting millions of Syrians who chose to seek refuge in the country, including over 1.6 million children.

"UNICEF and other partners support the efforts of the Turkish government to prevent a lost generation of children," the representative highlighted.

The civil war in neighboring Syria has saddled Turkey with the task of addressing challenges stemming from the ongoing crisis. Pursuing an open door policy, Turkey has been hosting over 3 million refugees. Aside from meeting the basic needs of refugees, Ankara has been focusing on providing education to refugee children with an aim of giving them a better future and exerting efforts for the socio-economic integration of refugees within the country. 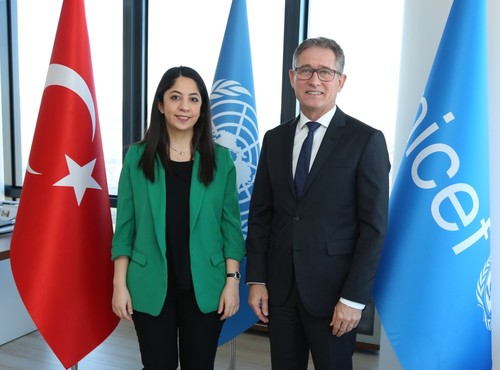 In relation to the Syrian refugee crisis, Duamelle said that one of the major challenges was to make sure that over 1 million children do not miss out on an education.

"Through the joint programs between the Ministry of National Education, UNICEF and other partners, more than 650,000 Syrian children were enrolled in schools across the country as of November 2018. One of the major programs that contribute to that success is the extension of the Conditional Cash Transfer for Education (CCTE) to refugees," Duamelle stated.

The CCTE is a nationwide social assistance program implemented by the General Directorate of Social Assistance (GDSA) of the Ministry of Family, Labor and Social Services since 2003.

Cash transfers are provided to vulnerable families who have school-going children on the condition of regular attendance to school. Regular school attendance is essential for the well-being of the children, ensuring adequate learning and recreation in childhood and reducing the chances of living in poverty in adulthood.

In 2017 the CCTE program was extended to benefit Syrian and other refugee children in Turkey under the same conditions. The extension of the CCTE program to refugees is a partnership between the Ministry of Family, Labor and Social Services, the Ministry of National Education, the Turkish Red Crescent and UNICEF, with financial support from the European Union and other donors.

Duamelle said that Syrians and other refugees can apply for the CCTE through the Social Assistance and Solidarity Foundations (SASFs) or Turkish Red Crescent Service Centers in the districts in which they reside. Accordingly, if these families meet the criteria, they receive cash transfers every two months provided that their children attend school regularly. Payments are made through Kızılaykart (Red Crescent Card) issued through Halkbank.

In relation to the extension of the CCTE program for refugees in May 2017, Duamelle said that more than 410,000 Syrian and other refugee children have benefitted from the program.

With an aim of ensuring the sustainability of the program, the teams pay visits to the families whose children have missed four or more days of school or are identified as at risk. The risks and needs of these children are assessed by the case workers and, if needed, children and their families are referred to the relevant services and supported in accessing those services.

Duamelle underlined that through the child protection component, the program contributes not only to sustain positive education outcomes; but also to mitigate child protection risks and violations, which are closely related with economic vulnerabilities; as well as to reduce the damage caused by exposure of children to any form of violence, abuse or neglect.

Commenting on the impact of the CCTE, the representative highlighted, "The first phase of the program reached more children than initially planned."

Yet he added that a single program can't ensure that all the obstacles preventing children from accessing education or leading to children dropping out of school are resolved.

Highlighting that Turkey has been hosting the largest number of refugees, the representative called for maintaining international support to Turkey.

Duamelle stressed that "Turkey is hosting the largest number of registered refugees in the world. It is crucial that the international community remains mobilized to support Turkey's efforts in caring for them."

Touching on UNICEF's efforts in the upcoming period Duamelle said, "In 2019, UNICEF will continue working jointly with the Turkish government and other partners to support efforts on behalf of children in Turkey, both Turkish and refugee children."

Duamelle also said that their program in Turkey covers a wide range of priority areas including access to education, providing child protection services to the most vulnerable groups, early childhood development, youth participation and social cohesion.