Startups that have emerged in the last three months have made their mark on the Turkish entrepreneurial ecosystem. While international funds and angel investors were rewarded for their investments in technology startups in Turkey, institutions also came to the fore with new seed investments

The second quarter figure for the Turkish entrepreneurial ecosystem was more mobile than ever before. Iyzico took the lead as the largest mobile payment startup with $165 million, followed by cloud-based business Foriba and Parachute. According to the 2019 second quarter figures announced by Startups.Watch, the leading research organization of the entrepreneurial ecosystem, emerging startups show that it is time to harvest funds. Meanwhile, successful projects in the sector linked to regulation enlarged by digital transformation projects of public and private institutions gave hope to other startups and angel investors. According to Startups.Watch 2019 second-quarter data, the contraction in new investments attracts attention, while startups continue to maintain their hopes for the next quarter. For the emergence of new and mature startups, the number of seed and investments must be increased.

In response to more pessimistic expectations in the classical economy, technology startups are striving to achieve positive results under all circumstances. The founding partners of iyzico and Foriba, who made a successful debut, and the managers of the funds investing in them came together at the Startups.Watch event. While sharing their stories with entrepreneurs and investors, iyzico investor 212 and Revo Capital executives announced that they would continue to support new startups in Turkey. Startups and investors that came together at the Startups.Watch event for the first time shared their reasons for coming together as well as their working models with the participants.

Numan Numan, one of the co-founders of the 212 venture capital fund, said those who invested in the fund got their money's worth. "We made the first investment in Turkey by trusting the iyzico team, based in Germany with no available products and customers at that time," he said. "With their business disciplines in Germany, they showed us that they would keep all their promises. So, we offered them the entire human network we had. We managed to repay the entire fund with a single exit, thus showing investors that they could win by investing in startups in Turkey."

Tahsin Işın, one of the founders of iyzico, said that the success achieved was not a coincidence. "We kept what we promised to our investors in the beginning. We did exactly what we told them while creating the team. We were ambitious as we expanded the team and digitized the process," he said. "We have proven that payment systems can be provided with secure digital infrastructure. We will now continue our work to achieve this in an international startup. We will extend the range of exporting startups in Turkey. When we looked at the countries in which iyzico's investor Payu invested in, we started to offer business opportunities in many countries with different payment technologies."

Cenk Bayraktar, one of the co-founders of Revo Capital venture capital fund, said that the regulation decision was instrumental in paving the way for investment, stressing that investors and entrepreneurs worked in harmony in this regard. "Foriba's growth potential became attractive for every investor. The company's partners actually had little intention of selling or accepting new investors. However, after the negotiations started, we worked in harmony," he said. "When emotions get involved, it is hard to make a decision. We managed this process well. We achieved significant experience at each stage. We continued to the negotiations until the last day."

Ahmet Bilgen, experienced as an angel investor in the entrepreneurial ecosystem, pointed to their pr​oject while forming the professional team. "The enthusiasm and passion displayed by Koray, who was working for Foriba while studying at university, enabled us to grow the business quickly," Bilgen noted. "We accelerated the e-invoice and transformation projects of the companies through regulation decisions. We managed to move our accumulation abroad rapidly. It was the best proof that a startup from Turkey could do a business of international quality." Acceleration programs and startups supported by technoparks took the stage in the Startups.Watch event. In the section supported by the NGN smart cloud platform, all startups had the opportunity to explain the solutions they developed to investors in five minutes. Juphy, supported by İş Bank's venture acceleration program Workup; Netbox, which was launched with the support of Türk Telekom venture acceleration program; Neurocess, supported by Bilkent Cyberpark; Payfull, supported by the Guild Entrepreneurship Center; Ludens, supported by Code.YapiKredi; and Nakitup, which received support from the Albaraka acceleration program Garaj, managed to present their projects to investors. 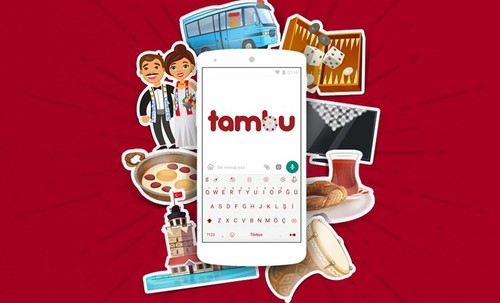 If the world has emojis, we have Turkish-style tambujis

Türk Telekom's Tambu virtual platform came to the fore on World Emoji Day, an unofficial holiday celebrated on July 17. Speaking about the interest of Tambu keyboards, Türk Telekom Digital and Cyber Security Product Development Assistant General Manager Ramazan Demir said thanks to Tambu it is now possible to send an "eyvallah" emoji to extend gratitude or "quarter gold" and "evil eye bead" emojis to those getting married and having a child. "In line with the demands of the users, we added five new animated emojis to our tambujis on World Emoji Day. Based on the emojis that are frequently used in popular messaging applications, we brought a new interpretation to our tambujis," he continued. "Since love-related content is widely used both on Tambu and other platforms, we made a tambuji with hearts flying above its head. We have three unique Turkish tambujis as well. One of them is an emoji with a flying slipper a design based on mothers' habit of throwing slippers at their children. The other is an emoji eating sunflower seeds, inspired by the popular Turkish habit."

Ramazan Demir said that they realized that the crescent and star content in Tambu was used frequently. "For example, our crescent-star theme has been downloaded 1.2 million times," he explained. "Based on this, we designed a crescent-star heart emoji. We also have a praying emoji that we think people lack in everyday life. Our users will be able to access these new tambujis via the Tambu keyboard and keyboard application. While we continue to add new tambujis to our content inspired by our own culture, we will design our existing tambujis in accordance with new trends in the world."

Demir pointed out that Tambu offers a combination of personalized themes and many more colorful features. "Although Tambu is a modern and international platform, it appeals to Turkish culture with its rich national and indigenous contents and articulates the feelings of our people. Tambu, which is also very popular among Turks living abroad, is regularly used by thousands of people in Europe every day," he said.

Three startups will be selected to continue imece's third Support Program between August and November. Held under the theme of "Reduced Inequalities" as one of the U.N.'s Sustainable Development Goals, the program received applications from 160 different social startups. Of the 160 applications, 18 startups got preliminary admission and conducted studies to improve their potential by reviewing their current status in the Support Program Bootcamp held from July 5-7. Seven of these 18 startups made their final presentations on July 19. The three teams to be selected by the jury members will receive TL 60,000 grants each to develop their startups and scale their impact, as well as mentoring, training, office and network support for three months in collaboration with İTÜ Çekirdek. As stated in the "Reducing Inequalities" topic of the Sustainable Development Goals, imece opens doors to startups aimed at empowering everyone and supporting social and economic inclusion regardless of age, gender, disability, race, ethnicity, religion, economic, or other status.