Israeli archaeologists announced the discovery of ruins of an early mosque over 1,200 years old during recent archaeological excavations in Negev desert southern Israel.

According to the Israel Antique Authority (IAA), the mosque unearthed in the Arab Bedouin city of Rahat is considered one of the earliest mosques in the world.

According excavation co-director Shahar Zur, "A small, rural mosque, dated to the seventh to eighth centuries CE [Common Era], is a rare find anywhere in the in the Middle East and in the world in general, and especially in the area north of Beersheba in which a similar building has not been found until now." 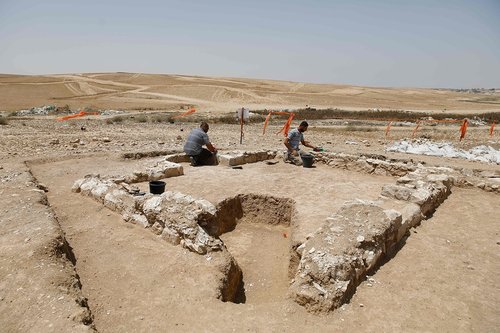 "During that era big mosques were built in Mecca and Jerusalem but here there is an evidence of an ancient mosque that was apparently used by the local farmers," he said

In addition to the mosque, other remains of large buildings were also discovered. The structures featured divisions according to various purposes, including living rooms, open courtyards, storage spaces and food preparation and open-air ovens

Gideon Avni, an expert within the IAA, for his part said: "This is one of the oldest known mosques from the time of Islam's arrival after the Arab conquest of 636."

"The discovery of a mosque near an agricultural settlement between Be'er Sheva [Beersheba] and Ashkelon also points to the processes of cultural and the religious change which the country underwent during the transition from the Byzantine to the early Islamic period," he said.