The cat on wheels is living proof of hope

We love pets for being perfectly cute but some of them are not as fortunate as others, suffering from illnesses and disabilities. A paralyzed cat in Ankara was brought back to life by a loving and caring young man who believes disabilities are not obstacles in life

Cats are intelligent, independent, high-spirited and, of course, fluffy and cute. It is no surprise that people tend to adopt picture-perfect strays with big round eyes, long and silky coats, with the most eye-catching looks. While most animal lovers are looking for the perfect cat to for their houses, there are a great number of disabled cats that are often branded as not adoptable. These are the cats that were born with or acquire abnormalities.

Koca Kafa, or Big Head in English, this cat on wheels, is an inspiration to all animal lovers in Turkey. He is an important sign that disability does not mean inability. 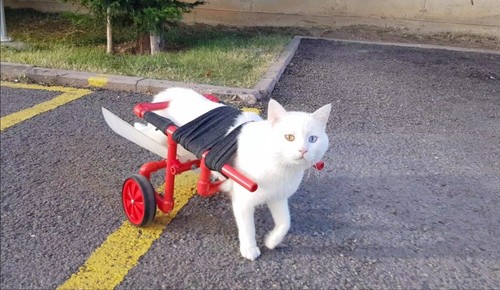 With his special walker, Koca Kafa can freely walk and do cat stuff.

Koca Kafa was saved and rehabilitated by a university student, after becoming paralyzed. Twenty-three-year-old caregiver Eren Güder said since Koca Kafa was deaf by birth, a dog attacked him when he was playing in a garden, causing a spinal injury that damaged nerves and making him paralyzed as he lost the control of his hind legs.

"Three years ago I met with Koca Kafa in a clinic when I took a stray animal there for treatment. The vets told me that Koca Kafa was going to be euthanized that day. A friend of mine was working in the clinic. As I am interested in animals, he told me the situation, and I said I would adopt him. Our story started that way," Güder explained.

When Koca Kafa was bitten by the dog, his former family decided to dump him at the vet even giving money to the clinic to have him euthanized. However, Koca Kafa was brought back to life and showed everyone that holding on to life is the real struggle.

"It took almost three months for surgical wounds and bedsores to heal. Dead tissues were spread throughout his body. In short, we had some rough times for a few months. His situation struck me emotionally, but Koca Kafa was so happy and that he seemed to not even feel the pain. He seemed he struggled for life and with him, I have struggled as well and we survived the difficult period," Güder said.

He further explained that despite his disability, Koca Kafa was trying to continue his daily routine by jumping and using scratching posts without any problem, using his forepaws to help him balance. "Koca Kafa has a very unique and upbeat personality," said Güder.

Güder's special care is helping Koca Kafa walk again with the help of a custom-made wheelchair produced by Güder himself, and with this assistance, he said that Koca Kafa has gained strength with or without use of a wheelchair.

"He has adapted to living life as a two-legged cat. Koca Kafa is more mobile and comfortable walking and running on his two feet. He can do almost anything that other cats do every day," Güder stressed.

In such situations, family support is crucial, Güder said, talking about the recovery process of Koca Kafa. Instead of putting Koca Kafa down, Güder choose to stand by him, help him every step of the way during his recovery. He worked hard to find a walker for Koca Kafa and now he is helping to build more for paralyzed animals. "I wanted to make walker for Koca Kafa. However, there were people who voluntarily produce walkers. I got in contact with them. Those people made a walker for Koca Kafa, but he didn't adapt to the walker right away. I bandaged him, but he wasn't stopping. Then I did research on the internet and I myself prepared a walker for him. This was actually designed for a dog, but I measured the size of Koca Kafa and fit the walker for him. Again, he had great difficulty in adapting to it; however, I didn't give up because I saw other disabled animals struggling to walk with that and I tied him up every day, even if he yelled at me. That's how he got used to it. At first, he had stand firm but then he started walking," Güder said. Güder is giving everything to make Koca Kafa feel like a normal cat. He arranges play time for Koca Kafa almost daily and goes to public parks together. He even takes Koca Kafa to Ankara's well-known parks like Ahlatlıbel, Kuğulu Park and Seymenler, as well as to open-air concerts and festivals.

In order to raise awareness on disabled animals, Güder started an Instagram account where he shares happy pictures of Koca Kafa to show his joy and happiness even with his disability. While he did not forecast such deep interest by people, the account became an internet sensation with a fan base of over 15,000 animal lovers. This proves that cats with disabilities are as happy and healthy as other cats.

While Güder always monitors Koca Kafa's well-being, he also made his home compliant with Koca Kafa's disability such as making sure all food and water dishes are easily accessible for him.

"He does all the things other cats do. Only he's unable to use the toilet," Güder explained, as Koca Kafa still suffers from incontinence, his bladder must be manually expressed and he needed a helping hand to go to the bathroom.

In fact, Koca Kafa is not the only animal that Güder adopted, indeed he takes care of three other pets in his house. Similar to the story of the Koca Kafa, Güder met Haçi approximately three and a half years ago. When they met, Haçi was a dog that was abandoned in the forest, he thought he would look after her in his neighborhood, as there are many other dogs he looks after in the area.

However, Haçi was different from the other dogs in the neighborhood and he never left Güder, even when he goes to school, she follows him until he gets onto the bus.

"When my family and I go somewhere with our car, she follows the car. Which is how she got lost once. We found her when someone called me by looking at the contact information written on the collar. As a matter of fact, when I go to school I am hiding between cars, as she is stalking me, she made me fear that she will get lost the same way again," Güder said.

Highlighting that Haçi and Koca Kafa are a good match for each other, Güder said that Haçi is jealous of Koca Kafa when he plays with him, but further added that she has a protective attitude when a cat or dog come close to Koca Kafa, even if the other animal is a friend of hers. It is important to raise awareness about animal disabilities. The story of Koca Kafa demonstrates the beauty of life no matter what is happening. Adopting special needs animals is a way to help them to turn into warriors. It is an inspiration that paralyzed cats can have happy and full lives. Koca Kafa is just a cat who was given another chance. Every animal deserves to be loved, and more people than ever are realizing that thanks to special needs cats who capture the hearts of people all over the world. Even though Koca Kafa is paralyzed, it doesn't stop him from playing and climbing over everything, he is just as loving, playful, and able to live a happy life as any other cat.