Turkey's exports to the U.K. are expected to drop by $2.4-3 billion, in the event of a no-deal Brexit, Turkish Trade Minister Ruhsar Pekcan said on Wednesday. The minister stated that her country was taking measures to face the situation in order to minimize losses.

Turkey may lose trade with Britain worth up to $3 billion in the event of a no-deal Brexit, Trade Minister Ruhsar Pekcan said on Wednesday, adding that many Turkish companies lacked information on the consequences of such a scenario.

Pekcan, speaking at a Turkey-UK Business Forum in Istanbul, said the losses would stem from Britain hiking import tariffs after Brexit in sectors including steel, automotives and textiles.

"We expect that the most affected sectors will be automotive by a trade loss worth up to $1.2 billion, textile with $1.3 billion and electronic and white goods by $500 million," Pekcan told a business forum in Istanbul. 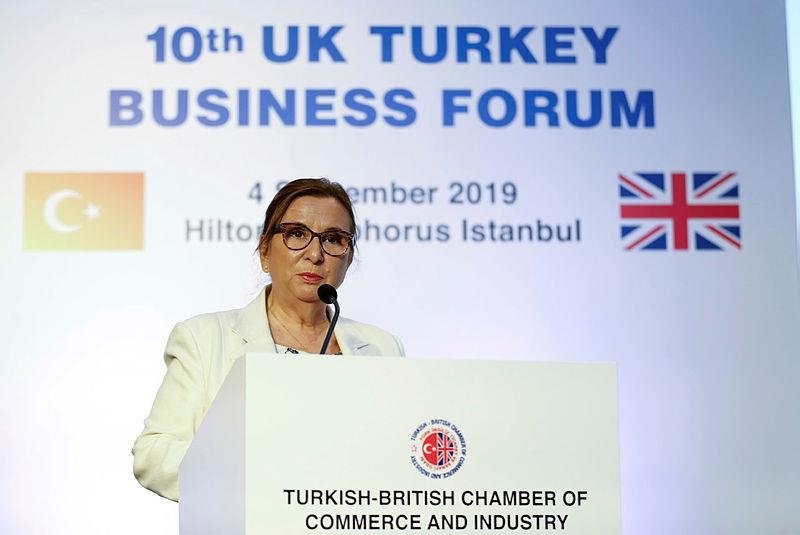 "Unfortunately, even though both the British side and us want to sign a free trade deal, we cannot do so because of our international commitments with the EU," she added.

She said her ministry would begin touring the country to inform companies on the potential impact of a no-deal Brexit.

"It seems that Brexit under a deal would be okay, but a no-deal Brexit will leave the Turkish businesses in a difficult position," Pekcan said.

The forum was organized by the Turkish British Chamber of Commerce and Industry (TBCCI) in association with Turkey's Investment Office and Foreign Economic Relations Board (DEIK).

Stressing that the U.K and Turkey are capable to turn difficulties into opportunities, the minister said the economic relations between the two countries, will continue to thrive even after the Brexit.

The minister said the U.K is Turkey's one of the most important foreign trade partner, and the second destination for its exports.

She said the U.K. has signed free trade agreements (FTA) with many nations.

But expressed inability of Turkey to sign an FTA, due to international commitments with the EU.

Pekcan stressed that bilateral investments between the two countries have exceeded $10 billion. She, however, said the figure is too low, implying that investment sector needs to grow rapidly.

"We can cooperate in technology, such as in information technology, software, block chain, big data and artificial intelligence. We aim to raise share of high technology in our exports to over 3%," she added.

British lawmakers, who on Tuesday seized control of the parliamentary timetable to avert a no-deal outcome, are expected to introduce a bill on Wednesday seeking to stop Britain from leaving the European Union on Oct. 31 without transitional arrangements.