Talking to reporters onboard the presidential plane after his meeting with his Russian counterpart, he said that a ceasefire between Russia and Ukraine is possible "if parties really show sensitivity to promises made".

Turkish president Recep Tayyip Erdoğan said on Saturday that he told Russian counterpart Vladimir Putin to hold a meeting with the Ukrainian president Volodymyr Zelensky in Türkiye to contribute to the regional peace.

Talking to reporters onboard the presidential plane after his meeting with his Russian counterpart, he said that a ceasefire between Russia and Ukraine is possible "if parties really show sensitivity to promises made".

He also said he told Putin that, although Türkiye's intelligence carries out work with Syrian intelligence, terror groups are still there in Syria, asking for Russia's support in this regard.

"Russia's Putin maintains a fair approach toward Türkiye," he said.

"He will always be with us in the fight against terrorism."

Erdoğan also said that a Memorandum of Understanding (MoU) regarding Türkiye-Russia economic and commercial relations signed in Sochi, adding: "We agreed with Putin to pay ruble for some of the gas". 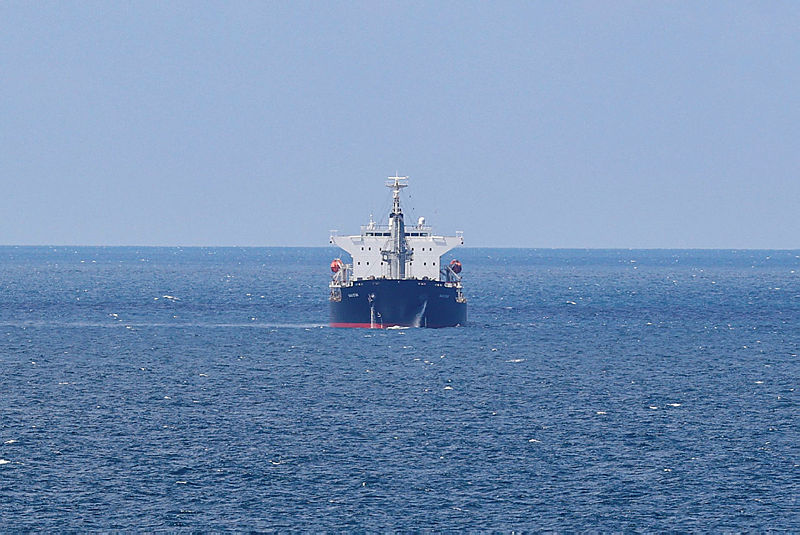 Talking also about the grain exports issue, Erdoğan said that Ankara is working with Moscow on grain shipment from Russian ports.

"The Razoni dry cargo ship passing through Istanbul was actually a first. Behind it, there are about 20 ships waiting at the ports. Above all, Russia is saying right now: 'We have the preparation, we have the strength to leave the ports. When will you mediate on this?'," he said.

"Our relevant ministries, primarily our Ministry of Commerce, are working quickly on this issue," he said.The leaders underlined the need for "the full implementation of the Istanbul agreement, including the unimpeded export of Russia's grain, fertilizer and raw materials for their production."

On July 22, Türkiye, the UN, Russia, and Ukraine signed a deal in Istanbul to reopen three Ukrainian ports for exports of Ukraine grain, which had been stuck for months due to the Russia-Ukraine war, now in its sixth month.

Erdoğan said Russia has 40 million tons of goods, adding that there are some countries who "spread rumors as if Türkiye had stopped the ships. There is no such thing."

He added all the ships will pass through Türkiye before reaching their final destination.

Thanks to Türkiye's diplomatic efforts to unblock Ukraine grain exports, the first ship to leave Ukraine under the agreement, Sierra Leone-flagged cargo vessel Razoni, departed from Odesa carrying over 26,500 tons of corn, got security clearance in Istanbul, and is on its way to the Lebanese port of Tripoli, its final destination. 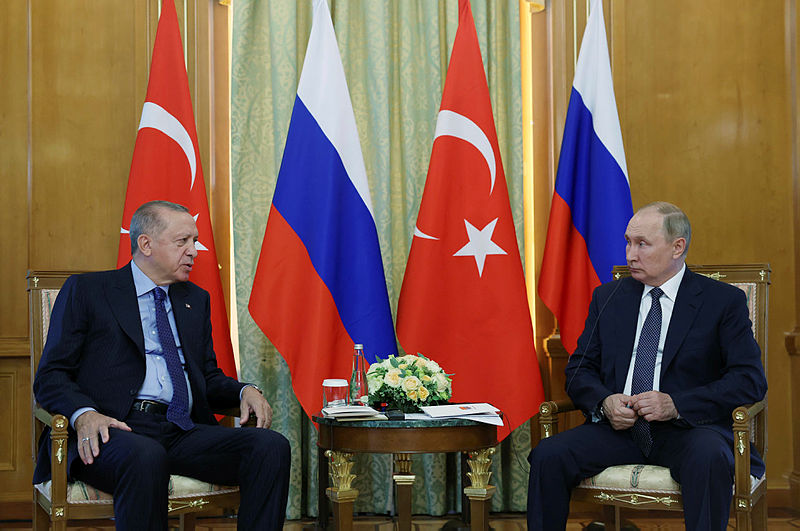 Upon a question that Germany and France are targeting Türkiye by defending the claims of Greece, Erdoğan said both Berlin and Paris have become an "instrument of Greek propaganda."

"It is unacceptable to criticize our country with inaccurate assessments while condoning Greece's steps that disregard international law. Türkiye's position for Europe's stability and security is obvious. We have once again demonstrated this role as a pioneer in resolving the global grain crisis," he added.

Thanks to Türkiye's diplomatic efforts to unblock Ukraine grain exports, the first ship to leave Ukraine under the agreement, Sierra Leone-flagged cargo vessel Razoni, departed from Odesa carrying over 26,500 tons of corn, got security clearance in Istanbul, and is on its way to the Lebanese port of Tripoli, its final destination.

Erdoğan stated there will be no winner in the Russia-Ukraine war, saying: "Despite the difficulties on the ground, I also maintain my strong belief that the crisis will be resolved at the negotiating table. I reminded Putin once again that we can host his meeting with [Ukrainian President Volodymyr] Zelenskyy."

Türkiye will continue to hold dialogue to contribute to regional and global peace, he added.

Erdoğan said he believes that a cease-fire between Russia and Ukraine is possible "if parties really show sensitivity to promises made."

TURKIYE, RUSSIA TO WORK AGAINST TERROR GROUPS IN SYRIA 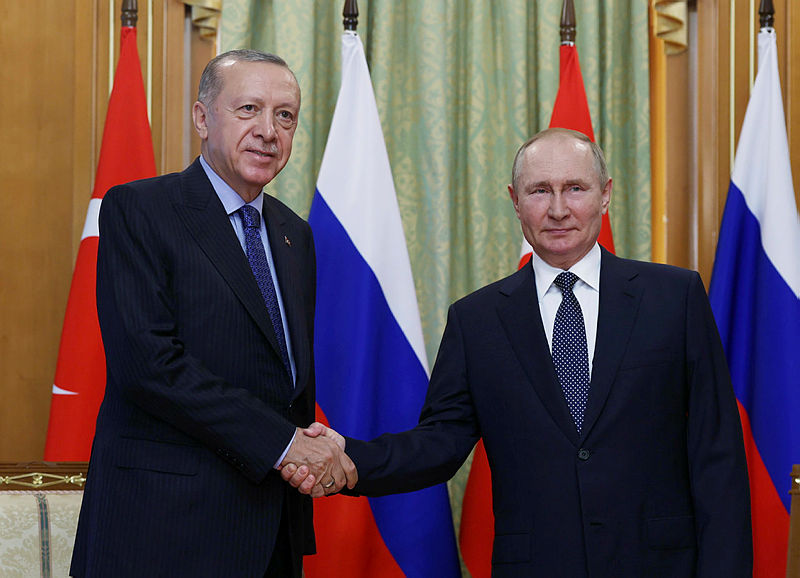 Erdoğan said he discussed with Putin the steps to be taken against terrorist organizations in Syria and agreed to take necessary steps to protect Syria's territorial integrity.

"...we agreed on the decision to give the necessary response to our fight against these herds of murderers who attacked our soldiers, police, security forces and civilian citizens," Erdoğan added.

He added Putin maintains fair approach toward Türkiye, adding: "He especially states that he will always be with us in the fight against terrorism."

Erdoğan said that Putin told him: "If you prefer to solve these together with the [Syrian] regime as much as possible, it will be much more accurate."

Since 2016, Ankara has launched a trio of successful anti-terror operations across its border in northern Syria to prevent the formation of a terror corridor and enable the peaceful settlement of residents: Euphrates Shield (2016), Olive Branch (2018), and Peace Spring (2019).

In its more than 35-year terror campaign against Türkiye, the PKK-listed as a terrorist organization by Türkiye, the US, and the European Union-has been responsible for the deaths of over 40,000 people, including women, children and infants. The YPG is the PKK's Syrian offshoot.

On the Akkuyu Nuclear Power Plant, a joint Turkish-Russian project, Erdoğan said it has "special importance" in Türkiye's energy strategy, adding the goal is to make the first reactor operational by 2023.

The president denied the rumors that the project has been delayed, saying: "There are claims such as '25,000 people are not working right now or this place has been closed'. I do not accept such a thing, and neither does the Russian side. They are working."

Erdogan said he will be visiting the Mersin province next week to inspect the project, and that he will inform about the progress to Putin.

Akkuyu has an operational date set for the first reactor by 2023, with the entire plant set to be up and running by 2025. The project started with a 2010 intergovernmental agreement between Türkiye and Russia. 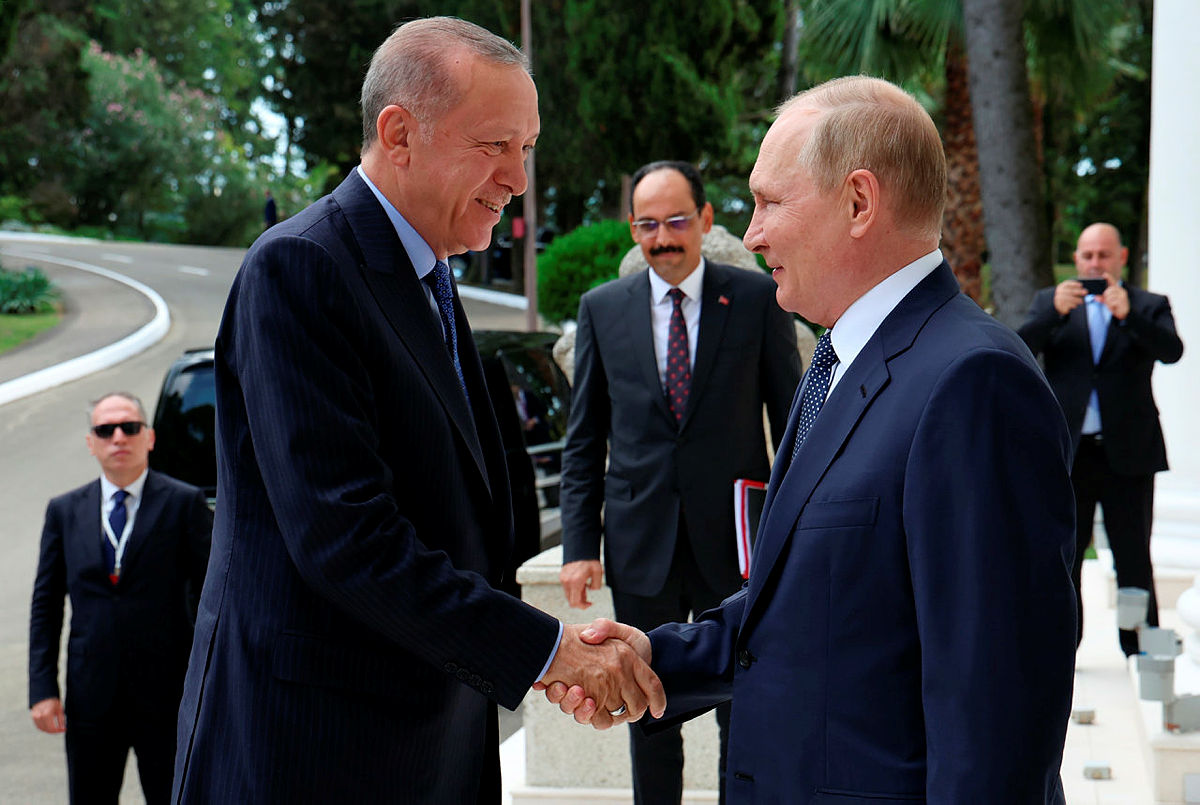 During the talks in Sochi, Erdoğan said, he agreed with Putin to enhance bilateral cooperation in the areas of economy and trade. The countries aim to increase the bilateral trade volume to $100 billion.

He added that a memorandum of understanding regarding Türkiye-Russia economic and commercial relations was signed in Sochi, adding: "We agreed on the ruble with Putin."

Erdogan said trading in the currency will contribute to both Türkiye and Russia financially, adding: "There is also the Mir payment system of Russia. Currently, our five banks continue to work on this. Here, too, there are serious developments. This, of course, is a very comfortable process for tourists coming from Russia. They can do their shopping and hotel payments with them."

About the recent tension between Baku and Yerevan, Erdoğan reiterated that Karabakh is located within the internationally recognized borders of Azerbaijan.

"Azerbaijan naturally does not want any illegal armed elements on its territory," he said.

According to the Azerbaijani Defense Ministry, it launched a retaliatory operation on Wednesday against Armenian forces in the Karabakh region after Armenia opened fire and killed an Azerbaijani soldier.

Armenia has accused Azerbaijan of violating the fall 2020 agreement that ended the 44-day Karabakh War, with Azerbaijan dismissing the charge as "nothing but mere hypocrisy."

Regarding the attack on the Azerbaijani Embassy in London, Erdoğan said it was "unacceptable", adding: "We hope the incident will be investigated and perpetrators will be punished".

The embassy building in London was stormed by the Mahdi Servants Union, a Shia Muslim organization based in London, according to UK media reports. Eight people were arrested after police reached the area.

About the heightened tensions between the US and China after US House Speaker Nancy Pelosi's visit to Taiwan, Erdogan said: "It is very important that all parties act with common sense and exercise restraint in order to reduce the tension regarding Taiwan."

Erdogan announced that Türkiye will "hopefully" attend Shanghai Cooperation Organization (SCO) meeting to be held in Uzbekistan in September upon the invitation of Putin.