As part of efforts to support those who live in areas cleared of terrorists during Turkey's anti-terror operations Euphrates Shield and Olive Branch, Humanitarian Relief Foundation [IHH] on Wednesday suprised the war-victim Syrian children by handing out thousands of presents to mark World Children's Day .

In a move to mark World Children's Day, IHH -- a Turkish humanitarian aid agency -- lavished gifts on war-weary Syrian children who have to work at early ages due to years-long civil war in their country.

Yakup Alaca, spokesman for the Humanitarian Relief Foundation (IHH) in southern Kilis province, said in a written statement that they surprised war-victim children as part of efforts to support those who live in areas cleared of terrorists during Turkey's anti-terror operations Euphrates Shield and Olive Branch. 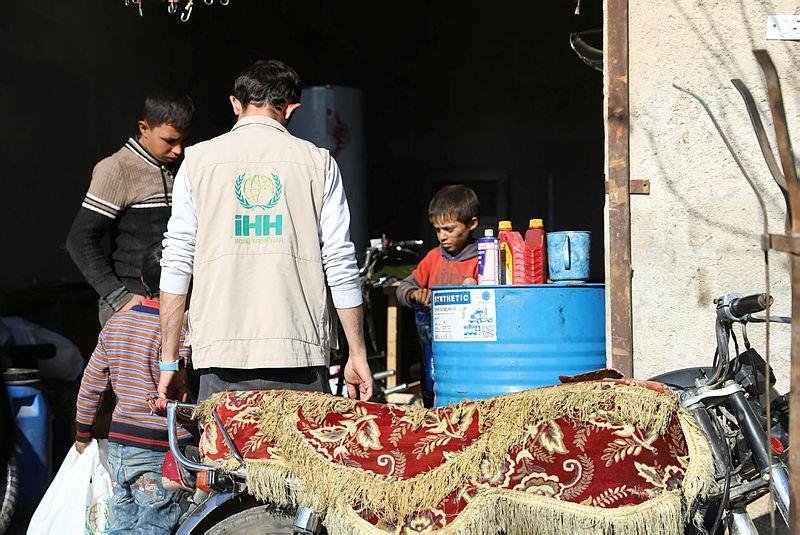 Noting that children, who work in young ages, were detected by the foundation's volunteers, Alaca said the children were dressed from tip to toe in the charity store set up by IHH in Syria's northwestern Afrin city bordering Turkey.

They were also given various presents, he added.

Wednesday marks World Children's Day to raise awareness on children's rights on the 30th anniversary of the UN Convention on the Rights of the Child.

Muhammed Moustafa, 14, said he sells desserts made by his mother on a vendor cart and tries to support his family living in tent city.

"I'm at school age, but I cannot go to school. I have to work and look after my siblings," Moustafa said, hoping for war to end as soon as possible to be able to go to school like his friends.

"We are five siblings and I look after them. One of my brothers are also collecting garbage like me," Amudi said, adding that she was not going to school as her family depends on them.

Going to the waste yard in Afrin, they collect metal and copper goods from the garbage hills, said Amudi.

"I don't like this work, because my hands get dirty. It takes a long time to clean them," she said.

Ankara and Washington reached a deal on Oct. 17 to pause the operation to allow the withdrawal of YPG/PKK terrorists from the planned safe zone.

On Oct. 22, Ankara and Moscow agreed on a deal under which YPG/PKK terrorists would pull back 30 kilometers (18.6 miles) south of Turkey's border with Syria within 150 hours, and security forces from Turkey and Russia would mount joint patrols there.

In its more than 30-year terror campaign against Turkey, the PKK -- listed as a terrorist organization by Turkey, the U.S. and EU -- has been responsible for the deaths of 40,000 people, including women, children, and infants. The YPG is the Syrian offshoot of the PKK.