Addressing the armed forces at the forward post, Modi said the age of expansionism is over and this is the age of development.

"History is witness that expansionist forces have either lost or were forced to turn back," said Modi.

Amid high tension between India and China in Ladakh, the visit to review the on-ground security situation and progress in talks with the Chinese military will help boost morale, said government sources.

Modi visited the forward post in Nimmoo to interact with troops and was given a joint briefing by the army, air force and the ITBP [Indo-Tibetan Border Police].

"Your bravery and dedication is unparalleled and has sent a message to the world. Those who are weak can never initiate peace, bravery is a pre-requisite for peace. India is proud of the courage of our armed forces, tales of your bravery and valor are echoing in every house in the country," Modi told the troops.

He was accompanied by Chief of Defense Staff Bipin Rawat and Army Chief General MM Naravane. This was the first visit by a member of the Cabinet Committee on Security since a June 15 clash.

"Interacting with our brave armed forces personnel at Nimmoo," Modi said on Instagram, sharing a photo.

Located at 11,000 feet above sea level, Nimmoo is among the tough terrains, surrounded by the Zanskar range and on the banks of the River Indus.

He will later meet injured soldiers at the military hospital, days after the June 15 border clash with China in which 20 Indian soldiers were killed in the line of duty. 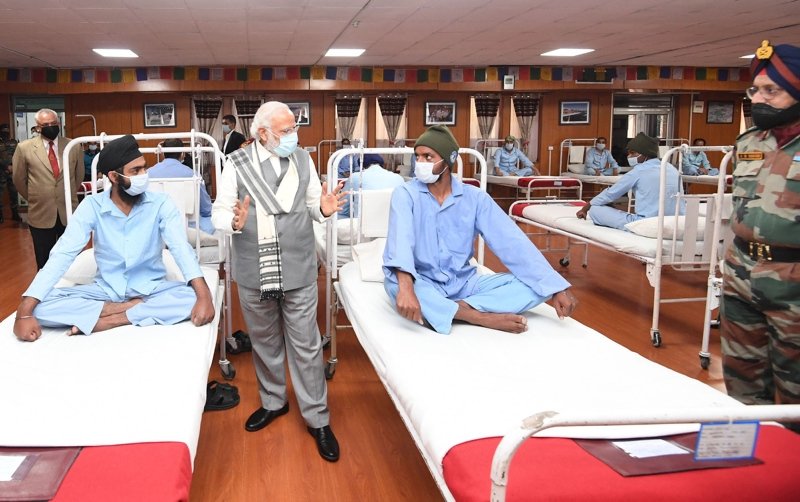 The visit comes a day after the defense minister put off his own visit to Ladakh.

Officials said the disengagement process will be long, tedious and in phases. After every step taken back, there will be a verification after which another step will be taken, reported local media.

On Thursday, Modi also held a telephonic conversation with Russian President Vladimir Putin after the "successful completion of the vote on constitutional amendments in Russia."

The two leaders agreed on the importance of closer India-Russia ties for jointly addressing the challenges of the post-COVID-19 world and maintaining the momentum of bilateral contacts and consultations, leading to the annual bilateral summit to be held in India later this year.

Modi conveyed his keenness to welcome Putin to India for the summit.