Holding a news conference with Libyan Prime Minister Fayez al-Serraj in the capital Ankara on Thursday, Turkish President Recep Tayyip Erdoğan stressed in his comments that Turkey would increase its support for Libya's internationally recognised government.

President Recep Tayyip Erdoğan said on Thursday Turkey will increase its support for Libya's internationally recognised leader Fayez al Serraj and that the conflict there can only be resolved politically under the auspices of the United Nations.

In a news conference with Serraj in Ankara, Erdoğan said that Turkey and Libya would also advance exploration and drilling for oil in the eastern Mediterranean Sea. 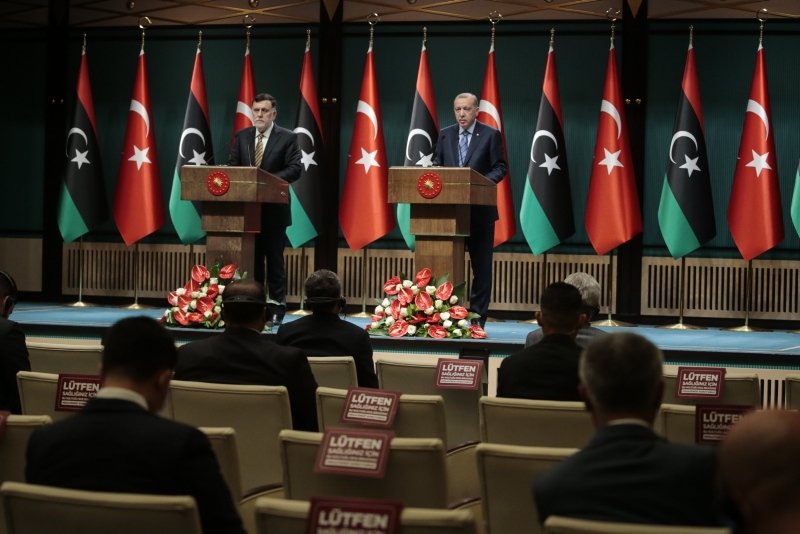 Erdoğan said eastern commander Khalifa Haftar and his supporters are the biggest obstacle to peace. Haftar's forces, backed by the United Arab Emirates, Russia and Egypt, have been attacking Tripoli since April 2019 but have been pushed back in recent months.

Turkish leader also called on the international community to stop the putschist Khalifa Haftar from illegally selling oil which rightfully belongs to the Libyan people.

"The oil, which should be used for the welfare of Libya and all Libyans, should not be allowed to be sold illegally by the putschists," he said.

Erdoğan also noted that Turkey will stand by the Serraj government, and continue fighting on all international platforms for a just and legitimate solution.


"We will never leave our Libyan brothers at the mercy of putschists and mercenaries," he said.

On a political process and solution under the auspices of the UN, Erdoğan said that although Haftar and his militias have committed crimes against humanity and war crimes, the Serraj government has always taken a positive attitude in this process.

Erdoğan stressed that a person who constantly threatens the future of Libya can no longer have a representation right to sit on the negotiation table.

"History will judge those who cause bloodshed and tears in Libya by supporting putschist Haftar," he added.

Referring to Libya's fight with COVID-19, Erdoğan said that despite Haftar's heinous attacks, the Libyan government took necessary measures against the pandemic.

"We've thanked Turkey for its historic and brave stance on Libya," said Sarraj in the meeting.

Referring to the Libyan government's fight with Haftar and his militias in the eastern part of the country, Sarraj said: "We will continue our struggle until we eliminate the enemy in Libya."

He said the Libyan government has achieved great success against the attacks initiated by mercenaries and their supporters.

"We completely liberated Tripoli and its surroundings. Actually, this success is the victory of all of us," he said.

On possible new talks, Sarraj said the Libyan government will not allow negotiations in the next stages with warlord Khalifa Haftar.

Meanwhile, Sarraj said the Libyan government wants to see Turkish companies in Libya during the reconstruction of the country.

He said Libya has a great opportunity to establish constructive cooperation with Turkey due to its natural and human resources.