WORLD Agencies and A News
Published May 29,2020

Muslim clerics on Friday recited prayers in the Hagia Sophia, the world famous Istanbul landmark which is now a museum after serving as a church and a mosque. The prayers were held to celebrate the anniversary of the conquest of Istanbul by the Ottomans in 1453.

Worshipers in Turkey have held their first communal Friday prayers in 74 days after the government reopened some mosques under an easing of pandemic restrictions.

Hundreds of worshippers wearing protective masks performed mass prayers outside Istanbul's historic Blue Mosque for the first time since mosques were shut down in March. 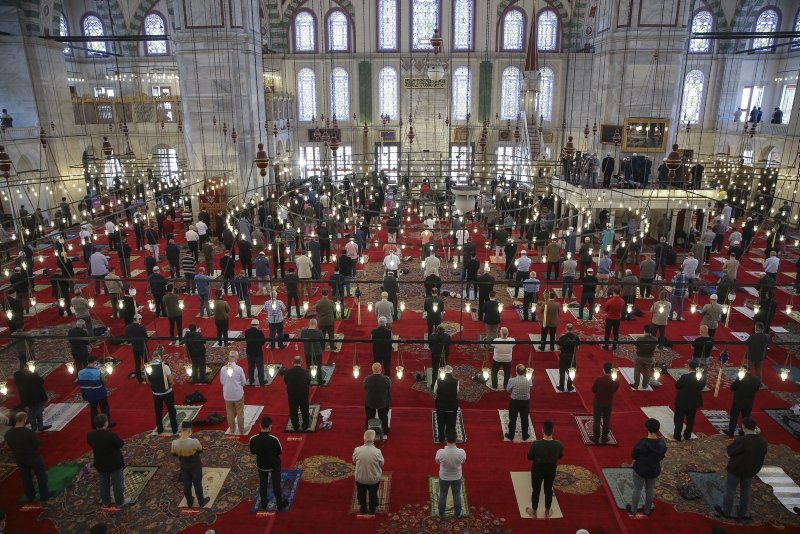 In the Ottoman-era Fatih mosque, worshippers prayed both inside and outside, with the municipality handing out disinfectants and disposable carpets.

"I have waited a lot for this, I have prayed a lot. I can say it's like a new birth, thanks to God, he has brought us back here," he said.

Another worshipper, Asum Tekif, 50, said: "It has a been a long time... we missed the mosques." 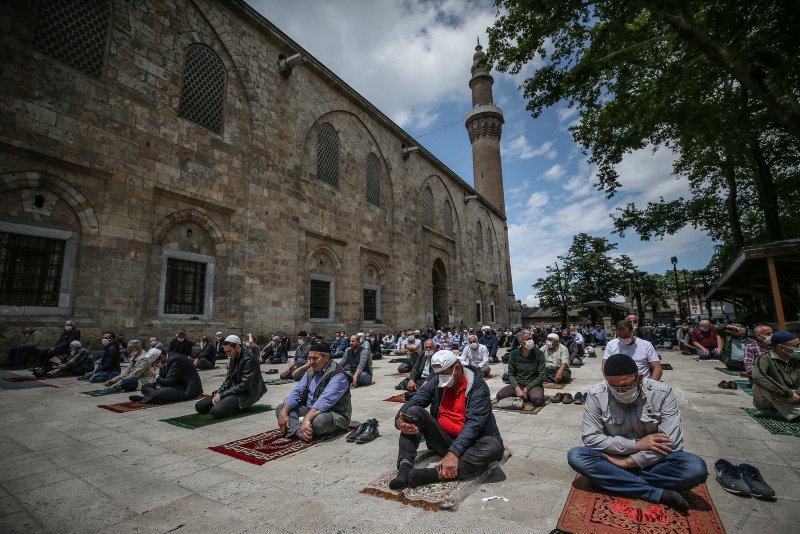 Meanwhile, President Recep Tayyip Erdoğan participated by video conference in events to mark the 567th anniversary of the Muslim conquest of Istanbul — then named Constantinople — by Ottoman Turks. The events included a prayer recital inside the Hagia Sophia, built as a Byzantine cathedral in the 6th Century and now a museum and UNESCO World Heritage site.

"It is very important to commemorate the 567th anniversary of the conquest ... through prayers in the Hagia Sophia," said President Erdoğan, who attended the ceremony via videoconference. 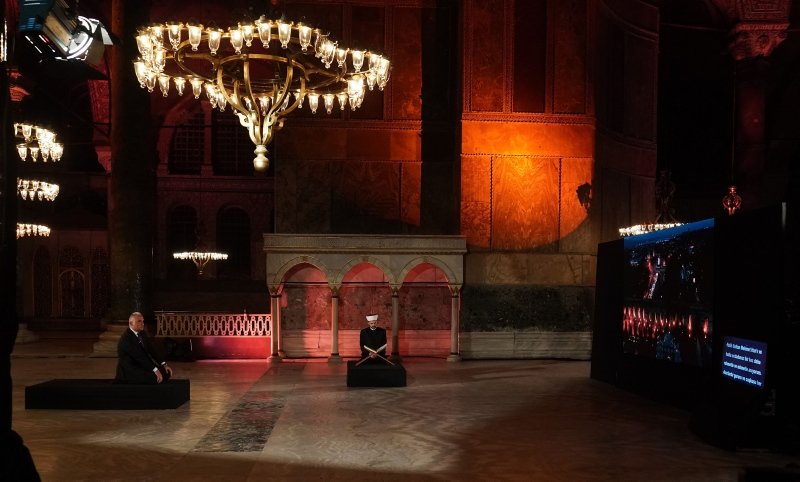 The Friday prayers were held in the courtyards of selected mosques across the country, to minimize the risk of infection. Authorities distributed masks at the entrance, sprayed hand sanitizers, and checked temperatures. Worshipers were asked to bring their own prayer rugs, but some mosques offered disposable paper rugs placed 1.5 meters (5 feet) apart.

The move follows a slowdown in confirmed COVID-19 infections and deaths.

Later on Friday, a Muslim cleric recited the "prayer of conquest" from the Quran inside the Hagia Sophia, which was converted into a mosque in 1453.

The conquest of Istanbul was celebrated Friday, 567 years after Fatih Sultan Mehmet gained victory in Istanbul, with a special program in Hagia Sophia.

The Ministry of Culture and Tourism organized "Conquest Feast in Hagia Sophia" in coordination with Turkish Presidency Directorate of Communications as part of celebrations throughout the day. 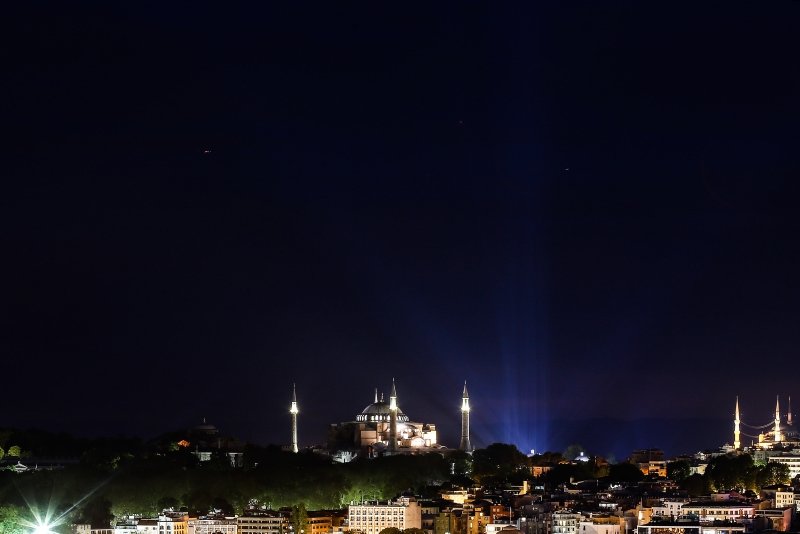 The program began with images taken by a drone of routes Fatih Sultan Mehmet navigated and arrived at Hagia Sophia by carrying ships on land while conquering Istanbul.

The program was followed with the recitation of the 48th chapter of the Quran, surah Al-Fath, with Turkish President Recep Tayyip Erdoğan viewing via video.

Erdoğan expressed gratitude to all those who did not abandon Hagia Sophia, the heirloom of the conquest.

He stressed it was important to remember the 567th anniversary with prayers and surah Al-Fatḥ.

Erdoğan said he had dedicated his life to his beloved Istanbul and noted that if the city was somehow removed from Earth, world history would have to be rewritten. 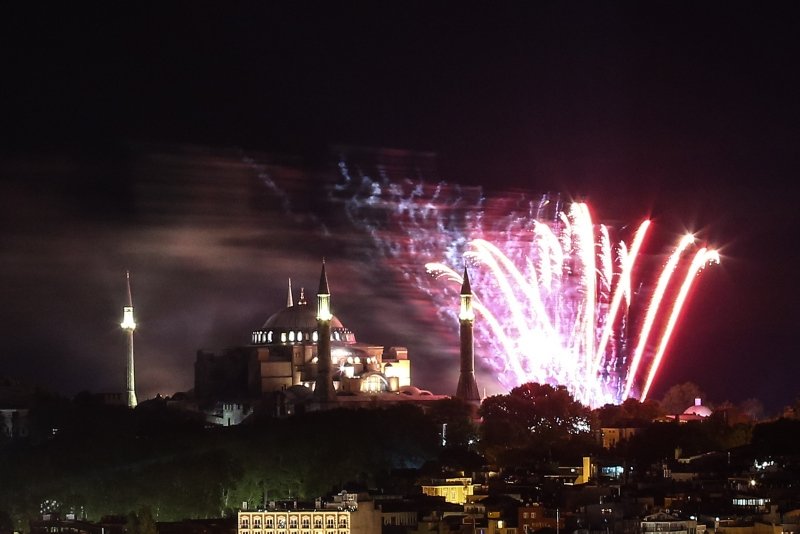 A presentation with the theme of the conquest of Istanbul was performed on a platform in front of the museum.

The Conquest Feast ended with a firework display from the Historic Peninsula.

In 2015, a Muslim cleric recited the Koran in the Hagia Sophia for the first time in 85 years to mark the opening of an exhibition.