Looking to improve the lives of their visually impaired African brothers and sisters, a group of students in western Turkey's Manisa has spent days creating something special for them: education materials.

At the "Goodness Workshop" in their Şehit Fatih Kalu Girls' Anatolian Imam-Hatip School, young girls are meticulously preparing world maps, Rubik cubes and other items for disadvantaged students around the world.

The last batch of the aid was for students in Sudan, Rwanda and Burundi and along with materials, Turkish students delivered walking sticks they bought with donations for their African counterparts.

The students have already won the hearts of their visually impaired counterparts from around the world and since last year, have sent education materials and educational toys they built to some 3,000 students abroad. 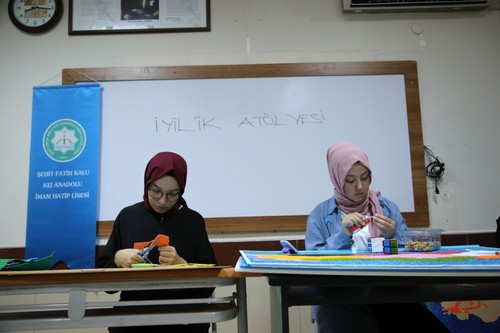 The latest batch of aid packages differs from others as they include school uniforms and 300 walking sticks. Sözer Vurgun, a geography teacher at the school, is among the founders of the workshop and supervises students as they assemble tangrams and braille maps with their own hands.

Vurgun points out that the materials students created were selected as the best educational project by the Turkish Ministry of Education. "Here we are producing educational materials visually impaired students can touch and learn from. They are not limited to geography course materials. Three is the number we focus on, as we plan on reaching out to 3,000 children in 30 schools in three different countries. The feedback has been amazing," Vurgun told Anadolu Agency (AA). He showed a photo sent from Rwanda that shows students playing with the educational materials they sent.

"They also want more materials and when we asked them what they needed, they told us they did not even have paper to write," he recounts. As they reached out to more schools, they also started receiving demands from Sudan and Burundi.

"We also found out most students did not have walking sticks and mobilized the students and their parents so we could buy walking sticks for them," he says. The teacher added that their next goal was to contact more visually impaired students in Africa and other countries in need and send them as many materials as they can.

Azra Yılmaz, one of the students working at the workshop, says they were happy to help the visually impaired children. Fatma Türe, another student, says she got emotional when she saw photos of students using the maps and other items they designed. Tuğçe Yağdıran, another student at the workshop, says they spent hours in the workshop and was so pleased that their labor paid off. "We balanced our studies and our work for our friends [in Africa]. Seeing them using the items we built is amazing. We are very, very happy," Yağdıran said.

The school's principal, Necmi Çinici, said Turkey's flag carrier Turkish Airlines (THY) also agreed to help them when they heard about the project and offered them free shipping to deliver the educational material.

The international health body says approximately 26.3 million people in Africa have a form of visual impairment, and it is estimated that 15.3% of the world's blind population lives in Africa.