Assad regime could lead to a new humanitarian disaster in Syria: Çavuşoğlu

"If we cannot buy the F-35 [fighter jets], since we need fighter jets, we will seek for other alternatives. In this case, nobody can blame Turkey for buying fighter jets from this country or that country," Çavuşoğlu said in his remarks during a joint news conference with Norwegian Foreign Minister Ine Eriksen Soreide. Turkish minister also pointed out that if the Assad regime in Syria continued aggression, it would lead to a new humanitarian disaster.

Çavuşoğlu said if the regime in Syria continues aggression, it will lead to a new humanitarian disaster. 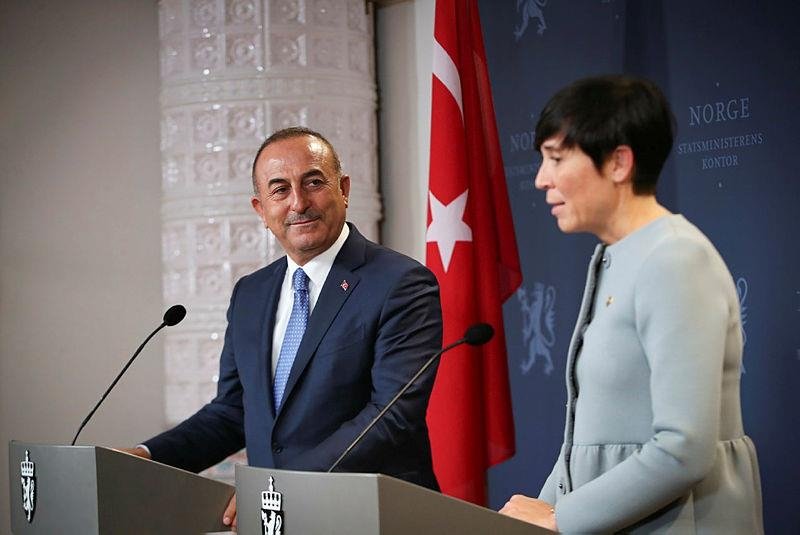 Soreide, for her part, praised Turkey's stance on Syria, saying that humanitarian aid must continue in the region.

"If Turkey had not taken a step, not opened the borders, or not accepted the refugees, the situation would be much worse in the region," she added.

Syria has been locked in a vicious civil war since early 2011, when the Assad regime cracked down on pro-democracy protests with unexpected ferocity.

Since then, hundreds of thousands of people have been killed and more than 10 million others displaced, according to UN officials.

- F-35 FIGHTER JETS AND S-400
Çavuşoğlu said that the air defense system was "Turkey's urgent need", adding: "We wanted to buy it from the U.S. and our other allies in NATO, but we couldn't."

"If we cannot buy the F-35 [fighter jets], since we need fighter jets, we will seek for other alternatives. In this case, nobody can blame Turkey for buying fighter jets from this country or that country," Çavuşoğlu added.

Since 2017, Turkey and the U.S. have been at odds over Turkey's decision to buy the S-400, a Russian-made missile defense system, and U.S. threats to break its contract to sell Turkey F-35 fighter jets over the dispute.

- TENSION IN STRAIT OF HORMUZ
Çavuşoğlu said Turkey is against sanctions and tension, adding: "Both Turkey and Norway will do their best to de-escalate the situation in our region."

Soreide said the Joint Comprehensive Plan of Action (JCPOA) must be preserved, referring to the nuclear deal signed between Iran and and Russia, China, France, the U.K. and the U.S. plus Germany.

Last year, the U.S. unilaterally withdrew from the deal and intensified pressure on Tehran by re-imposing sanctions targeting the country's energy and banking sectors.

Tensions between the U.S. and Iran also escalated last month after two oil tankers were attacked at the Strait of Hormuz. The U.S. held Iran responsible for the attacks, an accusation denied by Tehran.