US forces relocates its bases in Syria

The U.S., which evacuated more than half of its bases in Syria during Turkey's counter-terrorism operation, has strengthened its military presence in oil-rich areas and also brought back its forces to some previously evacuated bases.

The U.S. forces joined the civil war in Syria in September 2014 with airstrikes against the Daesh/ISIS terrorist organization.

In the face of rising Daesh/ISIS terror threat, the U.S. positioned the YPG/PKK terrorist organization as a ground force.

In addition to arms support to the terrorist organization, it also provided air support, established bases and military points in the areas occupied by YPG/PKK. 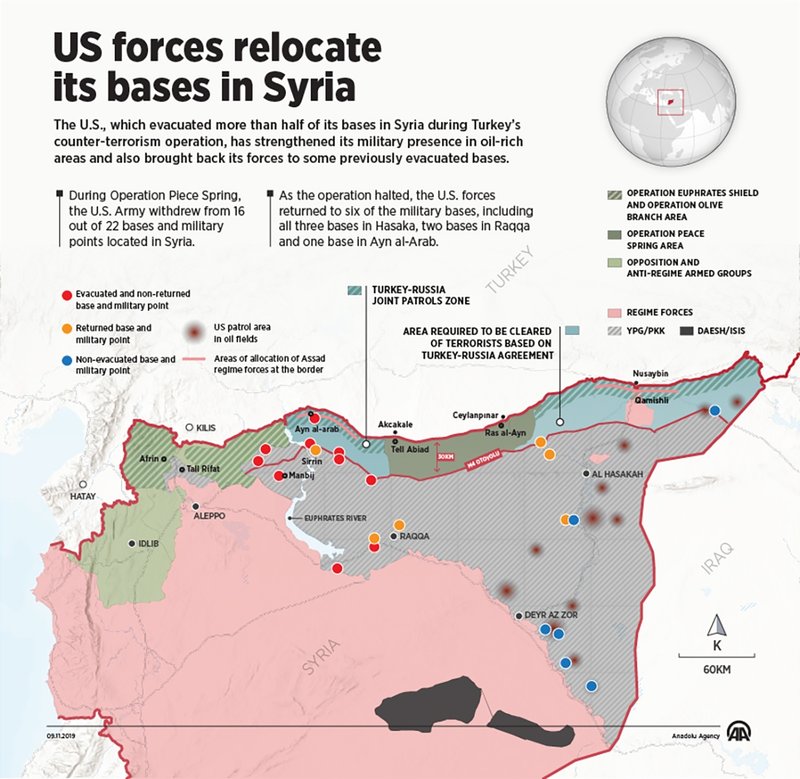 Ankara wants YPG/PKK terrorists to withdraw from the region so that a safe zone can be created to pave the way for the safe return of some two million refugees.

On Oct. 22, Turkey and Russia reached a deal under which YPG/PKK terrorists would pull back 30 km (18.6 mi) south of Turkey's border with Syria, and security forces from Turkey and Russia would mount joint patrols there.

US bases, military points in Syria before Operation Peace Spring

The U.S. Army's ground forces were based in 22 regions in Syria before Turkey launched its anti-terror Operation Peace Spring.

Around 2,000 military personnel were located in these bases -- five of them located in Hasaka province, four in Deir Ez-Zor, five in Raqqa, five in Ayn al-Arab (Kobane) and three in Manbij.

The U.S. forces withdrew from 16 points since the beginning of Turkey's operation, but stayed in Deir Ez-Zor and Hasaka -- the oil-rich regions in Syria -- according to an Anadolu Agency reporter on the ground.

They also evacuated four observation points at the Turkey-Syria border before the Operation Peace Spring started.

Return of US forces

As the operation halted, the U.S. forces returned to six of the military bases and points, including all three bases in Hasaka, two bases in Raqqa and one base in Ayn al-Arab.

The U.S. forces have not retuned to Manbij yet.

The U.S. army continues to patrol the oil fields occupied by the YPG/PKK terrorists in Syria.

In its more than 30-year terror campaign against Turkey, the PKK -- listed as a terrorist organization by Turkey, the U.S. and EU -- has been responsible for deaths of 40,000 people, including women, children and infants. The YPG is the Syrian offshoot of the PKK.