Thousands of citizens, joined by politicians, local authorities and NGOs held rallies throughout eastern Turkey on Saturday, protesting PKK attacks and voicing support for an ongoing sit-in by mothers whose children were kidnapped by the terrorist group.

Thousands of people took to the streets across Turkey on Saturday to protest against the PKK terror group which is responsible for the deaths of nearly 40,000 people in the country.

The mass protests were triggered by an ongoing demonstration by 24 mothers in the eastern province of Diyarbakır against the abduction of their children by the PKK. 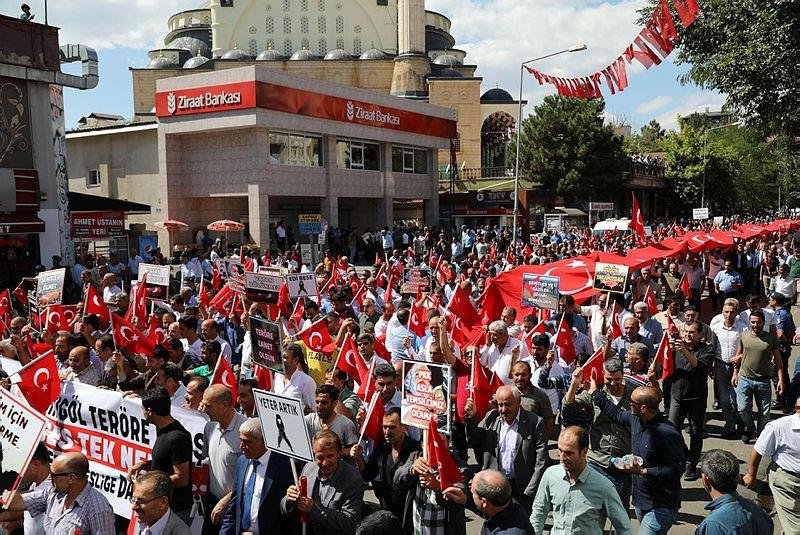 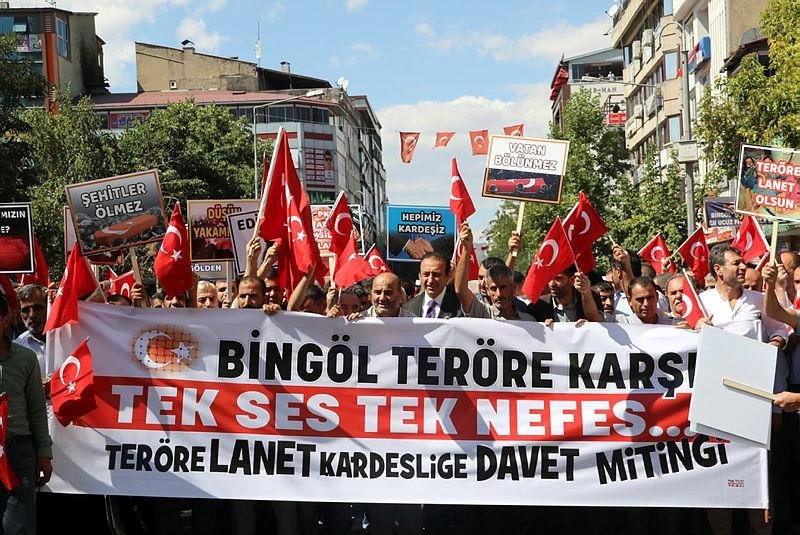 In Bingöl province, the rally was organized by the Bingöl Martyrs' and Veterans' Family and Human Rights Association (BİŞHAK). Participants carrying Turkish flags gathered in front of the clock tower in Yenişehir neighborhood and marched toward the 15 Temmuz Direniş Square. Protesters unfurled a 209-meter-long Turkish flag during the march. 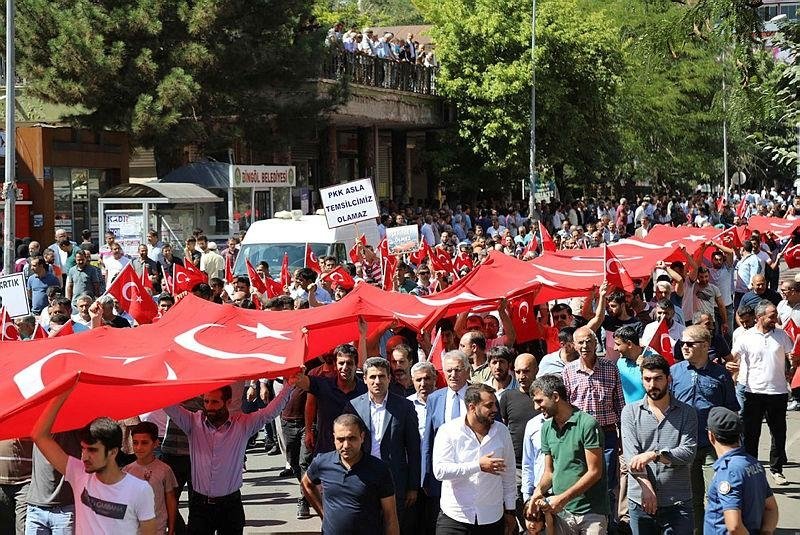 Some 51 non-governmental organizations (NGOs), the local governor and mayor, and the ruling Justice and Development (AK) Party lawmakers attended the protest in the eastern province of Van.

People carrying the Turkish flag chanted slogans against the PKK. "Turks, Kurds are brothers, separatists are rats," some said.

Public officials, lawmakers and NGO representatives also came together in the southeastern province of Hakkari. 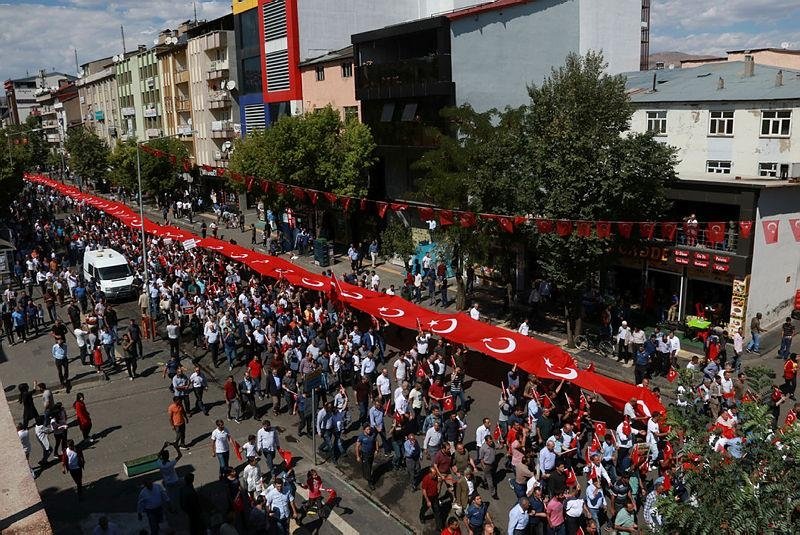 "I hope that the fight against terrorism will continue until there is not a single terrorist on this land. Those who point guns to these innocent people will be punished," said Governor Idris Akbıyık.

People also voiced support for the mothers in Diyarbakir protesting against the PKK child recruitments.

"We live in a region which suffers from terrorism the most. I am calling on the young people deceived and kidnapped by the PKK and taken to the mountains: Come and ease the pain in your mothers' heart, surrender to our state. Don't be someone's pawn," Sevim Bozan said, speaking on behalf of the mothers in Hakkari. 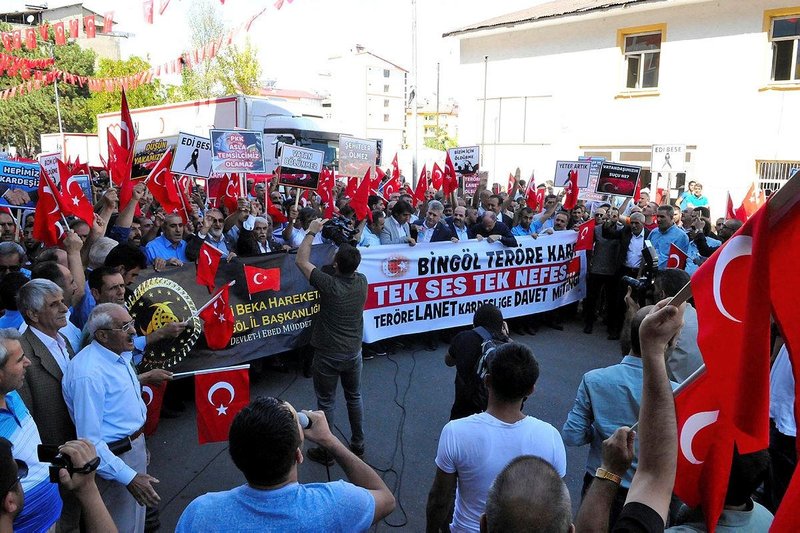 "The PKK is a terrorist organization that targets investments in the regions mostly populated by our Kurdish brothers, sets fire to the construction machines, burns down and destroys schools," said Idris Yıldız the Siirt head of the foundation of Turkish Veterans and the Martyrs' Families.

"We will no longer send our children to the mountains, but to the school. They will be lawyers, engineers, scientists, and we will not play into the hands of the organization. We want to go to Cudi for a picnic. We want the tourists to come to the waterfall in Gabar," said Mehmet Nuri Genç, an opinion leader in Şırnak's Idil district. 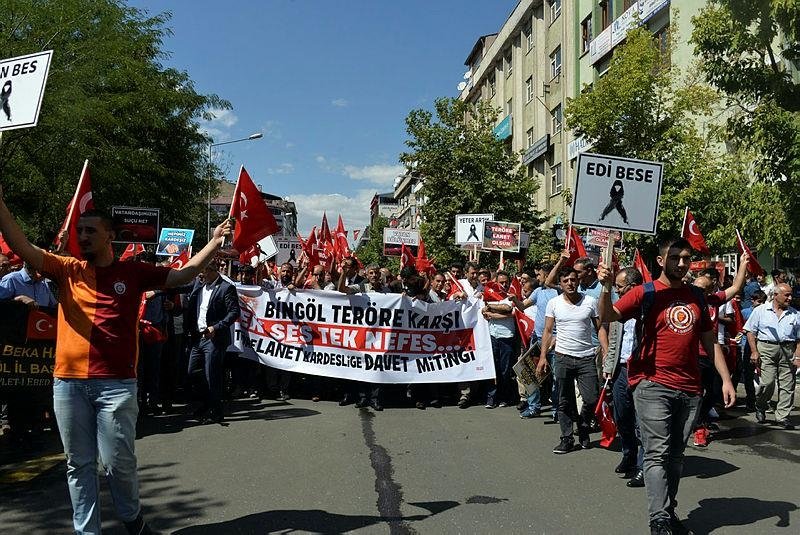 Recently on Thursday, seven people were killed and 10 others were injured in the Kulp district of southeastern Diyarbakır province when PKK terrorists detonated a roadside bomb while a pickup truck carrying forestry workers was passing by. The district mayor and another official from the pro-PKK Peoples' Democratic Party (HDP) as well as the party's district chairman were detained as part of an investigation into the attack.

The HDP, long facing public reaction and judicial probes over its ties to the PKK, is also under pressure over a growing civilian protest movement launched by local families. A sit-in launched in front of the party's Diyarbakır provincial headquarters by mothers whose children were kidnapped by the terrorist has entered its 12th day with the number of families reaching 32. The party is being accused of aiding the PKK to recruit new militants through its provincial and district organization as well as municipalities.