Turkey is getting ready to welcome a series of reforms in its legal system to enhance citizens' rights and freedoms while contributing to the democratization process. As the first set of reforms, expected to be followed by various others until 2023 when the desired level is achieved, are set to be in force next month, Metin Feyzioğlu, the head of the Union of Turkish Bar Associations and one of the main figures who worked on the process, states that the package as a whole has the potential to bring Turkey's legal system at a level that is even higher than the Copenhagen criteria.

"If the new legal reform package can be applied properly, if parts of the system that are lacking can be covered [through these reforms, as desired], the Copenhagen criteria would be left behind," said Feyzioğlu, pointing at the potential power of the reforms that are expected to have a striking influence over the existing legal system of the country. 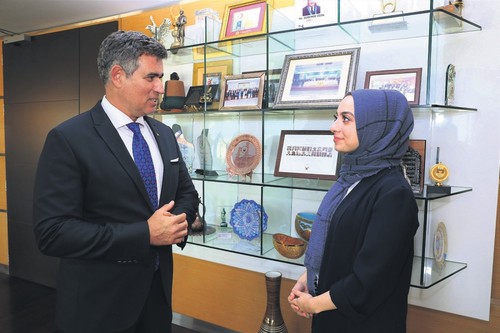 Using the slogan "Trust ensuring accessible justice," the reforms have nine aims, 63 targets and 256 activity programs. The nine aims are: the enhancement and protection of rights and liberties; the enhancement of independence, objectivity and transparency of the judiciary; enhancement of the quality and quantity of human resources; strengthening performance and efficiency; enabling the use of the right of a defense effectively; increasing the activity of the criminal justice system; simplification of civil justice and administrative procedures and increasing its presence; and last, generalizing alternative solution approaches. To achieve these aims, the act presents 63 targets and 256 activity programs. It includes plans to strengthen the judiciary through delivering these reforms. According to the aims and targets in the act, the existing regulation will be reviewed to raise standards regarding rights and liberties, and necessary changes will take place within the regulation.

According to Feyzioğlu, there are a few points to be considered when approaching Turkey's legal system and problems within. The first regards the legal system as a whole, especially when it comes to its trustworthiness. The second concerns the low levels education and inexperience that are becoming common in the legal circles, from judges to lawyers. Third and last, on the other hand, as Feyzioğlu said, is the lack of supervision over legal matters.

In Feyzioğlu's opinion, to enhance the trustworthiness of the system and reach a desired point where the independence of the judiciary is ensured regardless of who the judge is, a constitutional change is needed, which is not part of this reform package. However, when it comes to the second and third points, the reform package has lots to offer, to the point that it can eliminate all problems if applied properly.

Regarding the second point, Feyzioğlu's assessment and evaluation of the legal education in general constitutes the main agenda of the reform package.

"Those who say 'I'd be a lawyer if I couldn't manage to become anything else' will be eliminated," he said, adding that law schools' base point will be raised to a level that none of the students whose rank is above 100,000th in college exams will be able to enter. In Turkey, more than 2.5 students enter the college exam each year and the current lowest ranking of law schools when accepting students is in the 200,000s.

"It'll reach a point where faculty quotas will not be filled," Feyzioğlu added.

Another innovation in the reform package regarding education is to bring exams for candidates who aim to become lawyers, judges and prosecutors. That is to say, from now on, to become a lawyer, judge or a prosecutor, going to a law school will not be enough, as candidates will have to prove that they are qualified for these occupations.

Entrance into law-related proficiency exams will be issued for law students who want to be deputy notaries, deputy judges, deputy prosecutors and legal interns. Those who pass this exam will have a chance to take exams specifically for becoming the deputies of judges or prosecutors or the deputies of notaries.

Regarding the third point, Feyzioğlu said that especially when it comes to freedom of thought and cases in relation to that, there might be some problems for judges who may fail to be completely objective when approaching the issue.

"Every case regarding freedom of thought must go to court of cassation," Feyzioğlu said, highlighting the importance of the issue and the necessity of supervision on such decisions.

When it comes to the contribution of the reform package to the legal system and Turkey, Feyzioğlu is quite clear as he sees this package as some sort of "salvation" for the country's future.

"The new legal reform package provides salvation for Turkey in terms of its economy, rights and freedoms and democratization," the top lawyer in the country said, expressing his full support for the vision itself. He added that he is very satisfied with the whole process as a whole as it was full of discussions with a vision that is proper for a democratic country.

In addition, he said that many supporters of the PKK, its affiliates and the Gülenist Terror Group (FETÖ) do not want this reform package to be real since it will prove once again that their unfair claims regarding Turkey are just nonsense.

"If a country has been working on making its legal system better by launching various reforms for 15 years, you can't claim that this country is a dictatorship," he said, noting that Turkey is a state of law.

Feyzioğlu indicated that if the judiciary of a country, which has the last word on everything, is trustworthy then no one can slander that country.

"This is a living piece [document]," he noted.

Criticizing those who oppose the package and any steps that are taken in line with the government in general, Feyzioğlu said that they prefer to stick to the negative rather than produce something positive.

"People who grasp spreading hopelessness as a way of politics overlook how much harm the lack of hope causes for the country," he said, adding that some circles expect innovations to be done with a "magic wand," but reality does not work that way.

As far as the bar associations who protested the union's cooperation with the government and the recent attendance at the opening of the court year program organized by the court of cassation at the presidential complex in Ankara, are concerned, Feyzioğlu said that their attitude was more than just opposition to the union but an act against the Turkish Republic in general.

"They [opposing associations] use the word 'captive' regarding the detainee lawyers in their statement of protest, criticizing us for overlooking them. This is a term that was originally used by the PKK terror group. This is not a word that lawyers would normally use when referring to a detainee," he said, indicating that by grasping the rhetoric of the PKK, they are actually legitimizing the terrorist group.

Recently, some bar associations protested the union's decision to participate in the opening ceremony, merely because it was held in the Presidential Complex. They went even further and called on the union administration to resign.

"Still, they are free to say whatever they want to say. This is freedom of thought; there can be no punishment against these words. However, they need a harsh answer since when it comes to the motherland, the rest is details," Feyzioğlu said.

According to the European Court of Human Rights, one can say whatever they want, and yet their words cannot include any violence or violent propaganda. Thus, it is indicated in the reform piece that the propaganda of terrorism is not considered freedom of thought.

Package differentiates itself from predecessors through its inclusive nature

The upcoming legal reform package differentiates itself from previous ones by including various legal circles in the process via consultation, according to Bar Association of Central Afyon province President Turgay Şahin, one of the 10 bar association heads who have worked on the process first hand.

"We know the drill about former legal reform works as well. Before this reform package, the union of bar associations was never included in the process. Thus, all that previous work failed, especially in speeding up legal procedures. It is highly likely that one of the main reasons behind this failure was that these packages were not inclusive in terms of consulting various legal parties in the country when coming up with the reforms," Şahin told Daily Sabah.

"Yet," he added, "This last package truly differentiates itself from previous ones when it comes to inclusiveness. Many state institutions, foundations, the union itself, alongside 10 bar associations have been included in the process."

Indicating that they were a bit biased at first, Şahin said that the package proved their biases wrong. "Now, when we look at the package we see that everything that we have discussed so far has been included," he added.

According to Şahin, after 2010, when there was the effect of FETÖ on the legal system, there was a lack of trust in the judiciary from citizens, and this package will rebuild trust.

"Previous reforms were based on increasing the comfort of judges and prosecutors. For the first time, however, this package presents a vision that is focused on the defense and the people and brings concrete practical solutions to certain issues such as the alternative resolution methods and the effective use of the right to a defense," he said.

"This is a package that the state's executive, legislative and judiciary forces are behind," Şahin said.

"Until now, reforms were all done as part of the accession process for the EU. However, now, we're seeing a reform package emerging from domestic dynamics. It's not the Copenhagen criteria, but the Ankara criteria."

In Şahin's opinion, Turkey's level in freedom of thought is far from bad when compared to the world. "However, we have some problems in application. Some decisions might be a bit imbalanced sometimes," he acknowledged.

Şahin explained that individual applications to the European Court of Human Rights will be taken care of more and judges and prosecutors will be trained accordingly. Even promotions will be designed in accordance with these principles. "This package acknowledges that this matter is not only about the legislation but also about the application, which needs serious alterations. It recognizes the problem, and we will witness the treatment together," he said.

"However," he added, "Freedoms should not prevent other freedoms. Since terrorist groups target the freedom of life, they cannot be considered as part of freedom of thought. "

Şahin said that this package would not only enhance Turkey's legal trustworthiness but also its prestige abroad.

When it comes to accessing legal services, Şahin presented two major points: the services of code of criminal procedure and legal assistance. "These two services enable people to access the legal system more via lawyers. However, payment to lawyers is quite low, which will be increased. Lawyers who provide legal assistance regularly will also receive training," he said.

"The aims are to ease access, to increase contentedness and to secure the costs for people. To secure costs, this package introduces legal protection insurance, which is a first in the world," Şahin indicated.

With this insurance, people will pay small subsidies regularly and will have a fund for their legal costs. That is to say, if they need a legal procedure, they'll be able to meet their costs for a lawyer for instance, from this fund. This is a very groundbreaking step since legal services have always been criticized for being too expensive. Yet, with this system, people are expected to not hesitate to engage in legal activities, while lawyers will no longer have to be concerned about their payments.

"Some 96% of the people in Turkey do not apply to lawyers when defending themselves in courts. The main reason for this is that it is very expensive. Turkey is the only country in the world where free legal services provided by the state, such as legal assistance, are this developed," Şahin said.