Heavy downpours pounded Istanbul on Saturday after a dayslong heatwave with flash flood warnings from experts over the last couple of days, disrupting public transport and traffic in various areas.

Flash floods were reported in lower parts and seafront areas of the city including major transport hubs such as Eminönü, Beşiktaş, Üsküdar, Karaköy, Kadıköy and Kabataş. The lifeless body of a man was found under the Unkapanı Underpass near the Golden Horn in Fatih district. Reports said the man could be one of the homeless seeking shelter in the underpass, where floodwaters reached 190 centimeters in depth. It is not clear whether the man drowned during the flood or was unconscious or dead before the flood. 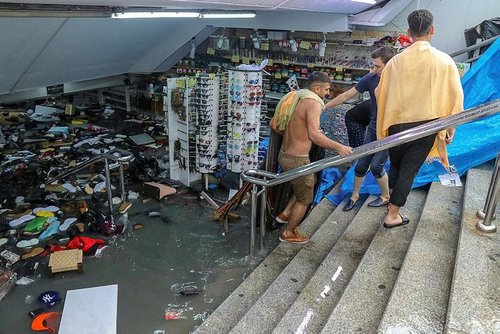 The pedestrian underpass in Eminönü Square on the European side was filled with floodwaters as the shops inside suffered great damage. 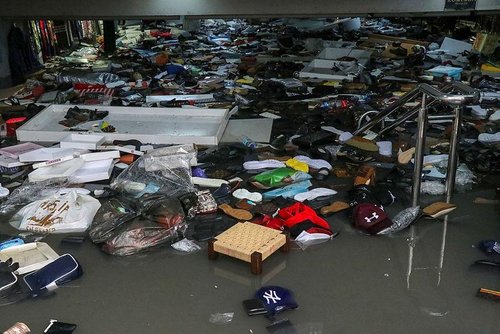 Avenues leading to Üsküdar Square by the Bosporus once again served as streams, flooding the square and producing images as if the sea met the land. 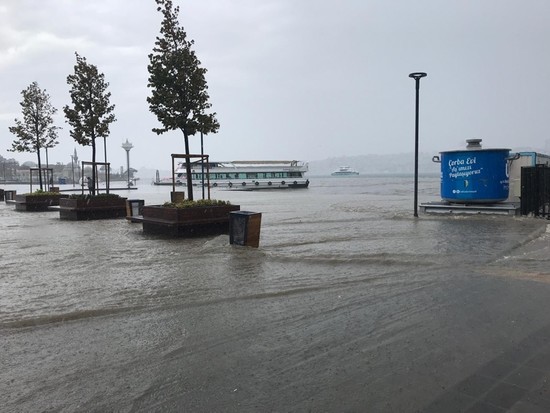 Many shops and homes were flooded in lower parts of the district where significant infrastructure, including some rain discharge tunnels, have been under construction for the last couple of years.

The coastal road in Bakırköy district, connecting to the Eurasia Tunnel crossing the Bosporus, was closed to traffic due to inundation.

The City Lines, Istanbul's municipal ferry operator, announced cancellations in all services as of 1.00 p.m. due to weather conditions and low visibility. Services were restored to normal as of 2:00 p.m. The Bosporus, one of the most important waterways in the world connecting the Black Sea and the Mediterranean, was also closed to shipping. Intercity ferry services of Istanbul Sea Buses (IDO) and Bursa Sea Buses (BUDO) were also suspended.

The T1 Kabataş-Bağcılar tram line was suspended over flooded tracks. Services were soon partially restored and returned back to normal an hour later.

The city's landmark Grand Bazaar, a 558-year-old complex that recently underwent an extensive roof and infrastructure restoration, was also affected by a flash flood.

Avcılar, Sefaköy, Bahçelievler, Çatalca, Zeytinburnu, Sarıyer, Fatih, Esenyurt, Kadıköy, Üsküdar, Tuzla and Pendik were the districts that received the most rainfall. Experts stated that some areas received as much as 113 kilograms of rain per square meters in only one and a half hour, the same amount of rain that would normally occur throughout the winter.

The Istanbul Metropolitan Municipality (IBB) said in a statement that 2,148 personnel, 645 vehicles and heavy-duty machines are responding to emergency calls.

Heavy downpours will be effective throughout the northwestern quarter of Turkey, the Turkish State Meteorological Service (TSMS) said, and flash flood warnings were also issued for capital Ankara. Temperatures are expected to drop between 5 to 10 degrees Celsius.