With its constructive approach to world politics -- seen recently in its quest to uncover the truth behind slain Saudi journalist Jamal Khashoggi, hammering out the Idlib deal in a bid to save millions of civilians, and effectively bringing Europe together with Russia despite their differences at the four-nation Istanbul summit on Syria -- Turkey has been a shining star in global politics. 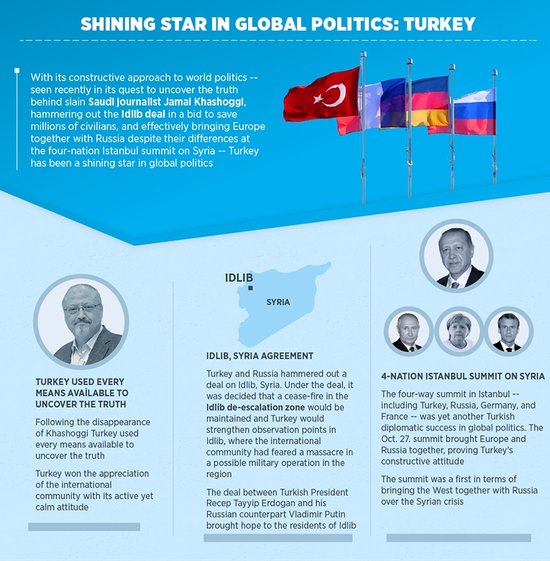 Khashoggi's disappearance after entering the Saudi Consulate in Istanbul on Oct. 2 made headlines worldwide.

Following the disappearance of Khashoggi -- one of the most influential journalists in the Middle East and a contributor to Al-Watan daily, an important platform for reformist Saudis -- Turkey used every means available to uncover the truth.

Despite Saudi authorities' claim that Khashoggi had left the building after entering it, Turkey launched a complete probe into the issue. Turkey won the appreciation of the international community with its active yet calm attitude. Soon after, Saudi Arabia announced that Khashoggi was killed in a "brawl."

While the U.S. failed to take a clear stance towards the crisis, Turkey attentively handled the subject, acquitting itself honorably in a crisis that could have damaged Turkey's reputation worldwide.

Thanks to a successful investigation by Turkish authorities, Saudi officials later confessed that the murder was "premeditated," preventing the killing from staying an unsolved murder.

On Sept. 17, Turkey and Russia hammered out a deal on Idlib, Syria. Under the deal, it was decided that a cease-fire in the Idlib de-escalation zone would be maintained and Turkey would strengthen observation points in Idlib, where the international community had feared a massacre in a possible military operation in the region.

As part of the deal, Russia would take necessary measures to prevent military operations or strikes on Idlib in addition to maintaining the status quo, which carried great importance for protecting civilians.

The deal between Turkish President Recep Tayyip Erdoğan and his Russian counterpart Vladimir Putin brought hope to the residents of Idlib.

The four-way summit in Istanbul -- including Turkey, Russia, Germany, and France -- was yet another Turkish diplomatic success in global politics. The Oct. 27. summit brought Europe and Russia together, proving Turkey's constructive attitude.

The summit was a first in terms of bringing the West together with Russia over the Syrian crisis. Attending the Syria summit were host Turkish President Recep Tayyip Erdoğan along with Russian President Vladimir Putin, French President Emmanuel Macron, and German Chancellor Angela Merkel.

In a joint declaration following the summit, the leaders put the emphasis on the importance of maintaining the fight against terrorism, fully implementing effective measures, and a permanent cease-fire that each party would comply with.

The Istanbul summit got widespread media coverage in the international press. Media outlets underlined that the summit would provide a significant contribution to solving the Syrian crisis thanks to calls to maintain the cease-fire in Idlib and establish a committee to draw up a new constitution.