Turkey marks 95th anniversary of the establishment of the Republic

Today will be the first time the Republic Day reception will be held in Istanbul, on the 95th anniversary of the day when Turkey was declared a republic, marking the end of the Ottoman Empire

The 95th anniversary of the founding of the Republic will be celebrated today across the country and in diplomatic sites around the world. Ceremonies will be held in every city, municipal and village center in the country.

As President Recep Tayyip Erdoğan and other senior officials will be in Istanbul today for the opening of the new airport, the traditional Republic Reception will be held outside the capital Ankara for the first time.

The day celebrates Oct. 29, 1923, when the Turkish Parliament amended the constitution to change the system of government to a republic. It concluded the four-year independence war against several countries, including Greece, and officially marked the end of the Ottoman Empire. Turkey's founder Mustafa Kemal Atatürk was elected as the first president of the Republic. The day has been celebrated since 1925.

Exhausted by war, the founding of the Republic meant the end of more than a decade of violence for the country. The Ottoman Empire fought in the first and second Balkan Wars, during which it lost much of its Balkan lands, after which Italy declared war and occupied Libya and the Dodecanese Islands in the southeast Aegean Sea. Soon after the war with Italy ended the Ottoman Empire entered World War I on the side of the Germany-led Central Powers. Having lost in the war, the empire also lost all of its Arab-majority lands, which later became Iraq, Syria, Lebanon, Saudi Arabia, Yemen, Jordan and Israel.

DECLARATION OF THE REPUBLIC 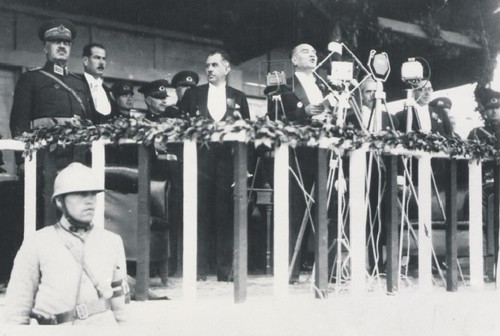 President Atatürk is making a speech on the tenth anniversary of the Republic.

In 1919, Turkish nationalists started an independence war both against the Allied Powers led by the British Empire and the Ottoman Empire that signed the Treaty of Serves, which handed over much of Anatolia to France, Italy and Greece.

It is accepted by most that the Independence War started with Mustafa Kemal Atatürk reaching Samsun on the Black Sea coast ostensibly as the sultan's representative. However, Atatürk, one of the few high-ranking Ottoman generals, known as pashas, with a winning record in the war, intended to unite and organize the already ascendant nationalist rebellions in the country.

The four-year war that ended in September 1922 saw Turkey securing the withdrawal of French and Italian forces and defeating the occupying Greek military.

The resulting international peace treaty signed in Lausanne, Switzerland on July 24, 1923 was the first post-World War I peace agreement not imposed on the defeated powers.

During the Independence War, Ankara in the center of Anatolia acted as the capital of the nationalists. The Turkish Parliament was founded in 1920, but the form of government was still not decided. The Ottoman capital Istanbul still had a sultan seated on his throne.

The new members of Parliament formed after the conclusion of the war decided on Oct. 13, 1923 that the capital of the country would from now on be Ankara. Until then, the acting head of government in Ankara was Atatürk as the parliamentary speaker.

On Oct. 27, 1923, members of the government resigned and Parliament failed to agree on a new one that could secure approval.

Atatürk, in his book "Speech," later recalled that on the night of Oct. 28 he and some of his closest associates decided to propose the establishment of the Republic the next day. 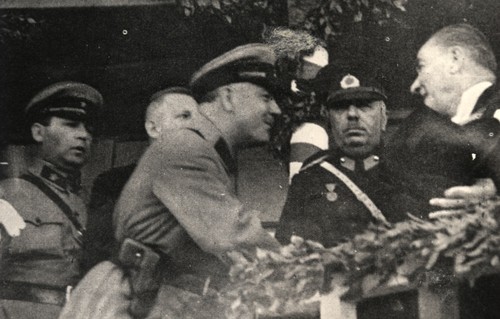 He, together with İsmet Pasha, who would later become İsmet İnönü, wrote the legislation that was accepted by the assembly 158 to none. The establishment of the Republic meant the end of the six-century-old Ottoman Empire.

The current government led by President Recep Tayyip Erdoğan has laid out a road map - Vision 2023 - that aims to transform the country into one of the largest 10 economies in the world by the centenary of the Republic.

The founding system of government was a parliamentary one. Last year's referendum transformed the country into a presidential system with a strong executive supported by an active legislative body.

The transformation of the bureaucracy into a more streamlined hierarchy with parallel reforms in almost all sections of the state to bring it into the information age will allow the efficient utilization of resources to ensure targets are achieved by 2023.

Megaprojects in infrastructure, including the Istanbul airport inaugurated today, which will be the world's largest when completed, aim to support the planned transformation of the economy.