A mystical big green stone located in the Hittite capital Hattusha lures a number of tourists from home and abroad every day.

Touted as a magical, wish stone at the great temple area in Turkey's Black Sea province of Çorum, the history and origin of this green and bright rock are shrouded in mystery.

Hattusha, capital of the Hittite Empire, dating back to 2000-1001 B.C., is listed in the UNESCO World Heritage sites.

"The green stone is very different from other stones in this archaeological site and that is why it is attracting such an attention," the head of archeologists in the ancient city, Andreas Schachner, told Anadolu Agency. 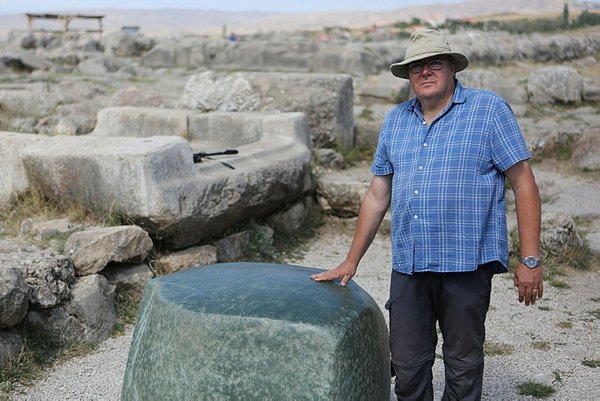 This stone is serpentinite or nephrite (jade). It is a kind of stone that can be found in the area. It is not so special stone, but it is remarkable that it is preserved monolithically [One large piece, jutting from the earth]," said the archaeologist.

The Hittites period marks the transition from the Middle to late Bronze Age. This is when the alphabet was developed, and the world saw the rise of the Hittite Empire.

They enjoyed considerable influence on civilizations in Anatolia and northern Syria, building palaces, temples and trade centers at Hattusha.

Hattusha is where the Kadesh Peace Treaty, the first in the world, was signed between the Hittites and Egyptians in 1280 B.C.