Traditional Turkish dishes and culinary delights are being introduced at an event held the in Malaysian capital that kicked off on Wednesday.

"Turkish Cuisine Week" was organized for the fourth time this year at a hotel in Kuala Lumpur.

Merve Safa Kavakçı, Turkey's consul general to Kuala Lumpur, along with several other ambassadors, attended the opening ceremony which began with a Sufi music concert and a Sema, or whirling dervish, performance. 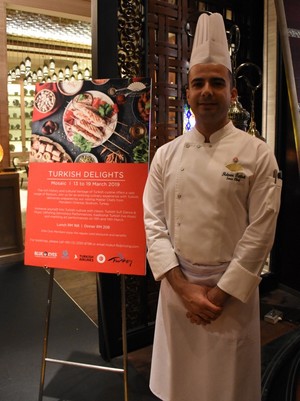 Adnan Öztürk, the chef that prepared the dishes, told Anadolu Agency that the event aims to exhibit a variety of dishes available in Turkish cuisine.

Öztürk said they are planning to organize similar events in other countries as well.

"We have been promoting our meals in Malaysia for four years, and Malay people react very positively when they taste our flavors. Kebab, döner and pide are especially popular," he said.

The event which is supported by the Turkish Embassy in Kuala Lumpur, Yunus Emre Institute's Kuala Lumpur Office, Turkish Airlines and Blue Eyes, a company which sells Turkish products in Malaysia, will run through March 19.