"It is not possible for an impatient person to eke out an existence, do science, live and struggle in Antarctica," said Burcu Özsoy, who leads the team.

Writing on small blackboards, members of the research team sent messages of love, science and environmental sensitivity to the world as their final work in the white continent. 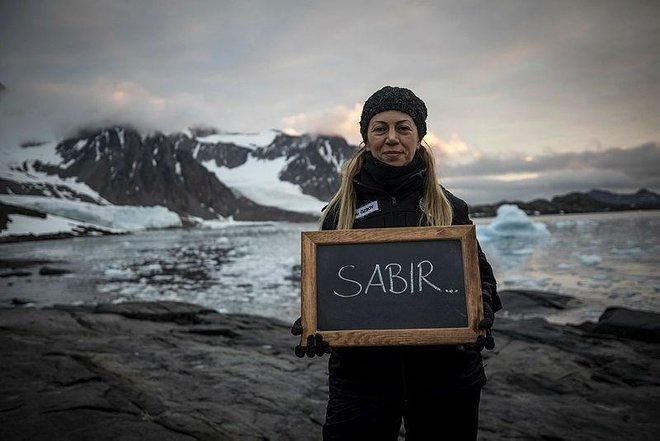 Emphasizing the dangers of climate change and pollution, Ercümen said: "The world is under intense threat."

"The unknown facts, especially in Antarctica, are the black box of the future," he said, adding that Science would "solve the mysteries" of the continent and the world.

"All is for science," said Korhan Özkan expressing hope that Turkey would continue to expand its drive to pursue science beyond Antarctica.

"Turkish scientists will find the courage to explore the deep seas and tropics, the world and any corner of the universe," Özkan said.

Sedat Serçe's message for the world was "respect and work," stressing that life was comprised of many different values, all of which required respect.

- LOVE AND PASSİON
The message of Soner Özdemir, a military engineer, was "love."

"The result of everything that we do with love is absolutely beautiful," he said. "From now on, I hope Antarctica becomes a love for Turkish scientists."

Caner Filiz, an instructor in Turkey's Gendarmerie and the Coast Guard Academies, emphasized the need for "affection."

Pointing out that a lack of love was humanity's biggest problem, Filiz said: "What we need is to love ourselves, others and nature and to purify our souls from all kinds of evil thoughts."

Scientist Bilge Tutak highlighted the harsh conditions on the icy continent and the team's "blood, sweat, tears, and victory."

"After a difficult time with tired bodies and nervous breakdowns, we reached a happy ending by establishing the scientific research camp," Tutak said.

Captain Özgün Oktar stressed that man had arrived in Antarctica despite all odds, and emphasized the importance of "effort."

"Without labor, nothing works, and this continent wants the most intense of effort," Oktar said.

Suggesting children be "curious," scientist Selahattin Ünsal Karahan said without this quality development would not be possible, adding that the future would be shaped by curiosity.

Murat Ateş of Turkish naval forces asked people to "care about the world" which will be inherited by future generations.

Scientist Burak Karacık named "serenity and passion," as defining qualities of the continent.

The message of "Harmony and unity" was critical in achieving the targets set out at the beginning of the mission, according to scientist Sevil Deniz Yakan Dündar.