Having started its journey 86 years ago with only five aircraft with a capacity of just 28 seats in total, Turkish Airlines today has a fleet of 336 aircraft and flies to the most countries in the world

Turkey's most valuable brand and the airline that flies to the most countries in the world, Turkish Airlines (THY), has celebrated its 86th year in the sky. Having first started carrying the national flag in 1933 with a fleet of five aircraft with a total capacity of 28 seats, the global brand today flies hundreds of thousands of passengers all around the world with its modern fleet of 336 aircraft, according to a statement by the company's press office. Turkish Airlines was established under the name of "State Airlines Administration" as a department of the Defense Ministry on May 20, 1933, and became an arm of the Transport Ministry under the name of "State Airlines General Directorate" in 1938.

Having inaugurated its operations at Istanbul Atatürk Airport, initially known as the Yeşilköy Airport after the neighborhood where it is located in, THY laid foundations for today's successes with new planes it added to its fleet in 1943-1945.

Atatürk Airport was closed for commercial flights after all operations were moved to Istanbul Airport in March of this year.

With the increase of passenger capacity and targets, the national flag carrier performed its first international flight from Ankara to Athens via Istanbul on Feb. 12, 1947. The flight that was carried out with the Douglas DC-3 aircraft with a registration code of TC-ABA lasted around two hours and 40 minutes. 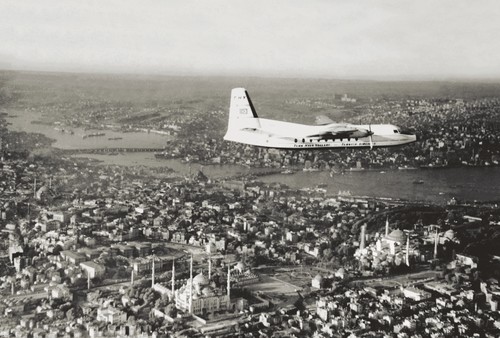 Four years after its inaugural flight to Athens, the carrier soon expanded and added Nicosia, Beirut and Cairo to its international flight destinations in 1951. In 1956, the Turkish government reorganized the airline under the name Turkish Airlines Inc. (often abbreviated as THY). It was capitalized at TL 60 million.

In the 1960s, by creating a successful strategy in its overseas operations with the experience it gained in the Turkish market, Turkish Airlines already managed to make a name for itself in Europe in those years. With the appearance of jet airplanes in the sky, the national flag carrier's success journey also accelerated.

Having a fleet of 30 aircraft with a capacity of 4,037 seats and performing flights to three different continents in 1983, its 50th anniversary, Turkish Airlines managed to complete this important year by carrying 2.5 million passengers and 30,000 tons of cargo.

In the beginning of the 2000s, THY entered into a significant growth process with new investments, additional flight destinations and an expanding fleet, while there was a stagnation and decline experienced in the global aviation sector.

During the said period, the flag carrier did not only remain a passenger-carrying company, but became a brand that provides services to other airlines in the areas of aircraft maintenance, cargo transportation, ground handling, aircraft seat and kitchen production, and aviation and flight training.

Having expanded its flight network to 124 countries and 309 destinations, carrying 75 million passengers a year, as of 2019, the national flag carrier has made a brand new start to a stronger growth by moving to its new home, Istanbul Airport, as of April 6. The carrier, which has one of the youngest aircraft fleets in the world and carries out its operations at the new aviation hub Istanbul Airport, continues on its way to becoming the best airline company in the world.

Airline officials previously said that THY will serve with the world's youngest and largest fleet consisting of more than 400 planes by 2023. Within the framework its plans to expand operations at Istanbul Airport and enlarge its network, the company has ordered 165 narrow-body and 60 wide-body planes in addition to three cargo planes to be delivered from this year until 2024.

Turkish Airlines' consolidated net profit for 2018 surged by 533 percent to TL 4 billion. Its total sales revenue reached TL 62.9 billion, while this figure, which increased by 58 percent compared to the previous year, stood at TL 39.8 billion in 2017.

The Turkey Sovereign Wealth Fund holds a 49.12 percent share of the carrier, and the rest of the shares are publicly held.