Istanbul Airport, the multi-billion dollar landmark project, opened with a grand ceremony on the 95th anniversary of the Turkish Republic with the aim of connecting the world, boosting the local and global economy

Turkey has witnessed a historic moment with the opening of Istanbul's new airport on the 95th anniversary of the founding of the Republic. The grand opening ceremony for the first phase of the airport was held with President Recep Tayyip Erdoğan, Turkish ministers, officials and heads of state from around the world in attendance. Turkey's key megaproject aims to strengthen the country's vital role in integrating global economies by connecting 60 countries with a total economic size exceeding $20 billion. In his address at the opening ceremony, President Erdoğan announced the name of the country's newest airport. "Istanbul is not only Turkey's biggest city, but it is the most precious brand of our country. Therefore, the name of the new airport is Istanbul Airport," he said. The currently operational Atatürk Airport will soon conclude commercial flights but will remain place for international fairs, particularly aviation events, the president stated. The open areas of the airport will be redesigned as a public garden, as previously announced.

"Turkey connects 60 countries with a gross domestic product of $21 trillion to one another," Erdoğan said. "Istanbul Airport, therefore, reinforces Turkey's key role in the integration of the global economies. The airport will not only serve Turkey, but the region and the world."

The airport will provide the utmost convenience for passengers with rail systems, marine transportation and road transportation, he added.

For the financing of the construction, the president said, no Treasury guarantee has been provided. Turkey's state lenders Halkbank, Vakıfbank and Ziraat Bank and other private lenders Denizbank, Finansbank and Garanti Bank provided $4.5 billion for the construction of the airport. 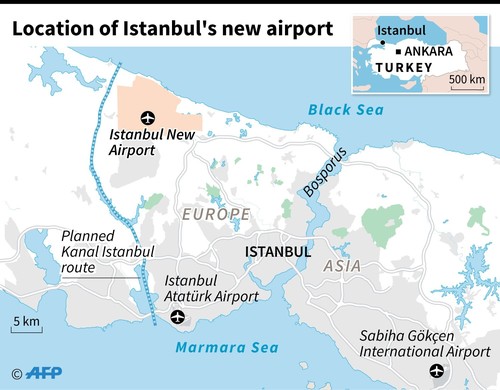 He also elaborated on the development of aviation sector over the last 16 years. He stressed that the number of airports across Turkey increased to 56, up from 26 since 2002. The number of countries to which Turkish Airlines offers flights increased from 50 to 120 while the number of wide-body aircraft in its fleet has reached 506.

The size of the aviation market has also reached $25 billion, up sustainably from $2.2 billion in 2002.

Transportation and Infrastructure Minister Mehmet Cahit Turhan stressed that airline companies that currently do not have regular flights to Turkey, will begin operating from the new airport.

"One third of the world population will be connected to Istanbul with the new airport," Turhan said.

The minister reiterated the aim to become the second-largest airport in terms of passenger numbers in the initial phase, and later as the busiest airport in the world when all facilities are completed.

The 42-kilometer long baggage claim carousels will minimize baggage loss and provide more convenience to passengers. Minister Turhan also said that 80 planes per hour will takeoff at the initial phase, while the number will increase to 250 after the completion of all phases of the airport.

Completed within 42 months, the first phase of the airport was built with a cost of 6 billion euros ($7.2 billion) with a public-private partnership (PPP) model by a consortium of Turkey's leading contractors Limak, Kolin, Cengiz, Mapa and Kalyon. The consortium will pay 1.1 billion euros annually for 25 years.

The total investment cost of the giant project is estimated to stand around 26.1 billion euros. The first stage will begin operations with two runways – 3,750 and 4,100 meters long, respectively – an air traffic control tower and service buildings. Some 200,000 laborers worked during the construction of the first phase.

The other phases of the airport, which is constructed on an area of 76.5 million square meters, are planned to be completed by 2023. When the construction of all the phases is complete, the airport will have six runways and operate with a capacity for more than 500 planes. The open and closed parking lot of the airport will be able to serve 70,000 automobiles.

Istanbul's new airport will be home to the world's largest duty-free shopping complex. The 53,000 square meter shopping complex will consist of six sections, including luxury stores and bazaar concepts.

In 2017, the Atlanta airport in the U.S. was the largest airport, with just under 104 million passengers, according to Airport Council International (ACI) figures. Next came Beijing with 95.7 million passengers, Dubai 88.2 million, Tokyo 85.4 million and Los Angeles 84.5 million.

In Europe, London-Heathrow ranked seventh globally with 78 million passengers last year. Paris-Charles de Gaulle came in 10th with 69.4 million, Amsterdam 11th with 68.5 million, Frankfurt 14th at 64.5 million and then Istanbul in 15th position with 64.1 million. The ACI said Turkish air traffic grew 10.9 percent last year, picking up pace in the first half of 2018 to 15.7 percent.

At the initial phase, five takeoffs and five landings will take place at the airport. Turkey's national flag carrier Turkish Airlines (THY) will hold the first flight to Turkish capital Ankara on Oct. 31. The airline company will fly to Turkish resort town Antalya on Nov.1 and to İzmir on Nov. 2 with first international flight to the Turkish Republic of Northern Cyprus (TRNC) on Nov. 1 and to Azerbaijan on Nov. 8.

It is expected that a daily 2,000 planes will go through the airport by the end of the year to over 350 destinations by over 250 carriers.

As well as boosting Istanbul's position as a global aviation hub, the new airport is expected to make significant contributions to the Turkish economy. Considering the economic impact of the airport, Istanbul's new airport will provide employment to 225,000 people by 2025. The additional household income to be generated will go up to $4.4 billion and its contribution to the economy will reach around 4.9 percent of the national income (TL 73 billion).

All aviation operations will move to the new airport at the end of December when Istanbul's main international airport, named after Turkey's founder Mustafa Kemal Atatürk, is closed down. Atatürk Airport, which now handles 64 million people a year, will transition for other uses, such as training activities, aviation fairs and civil use. On the Asian side of the city, Sabiha Gökçen Airport, which handled 31 million passengers last year, will remain open.